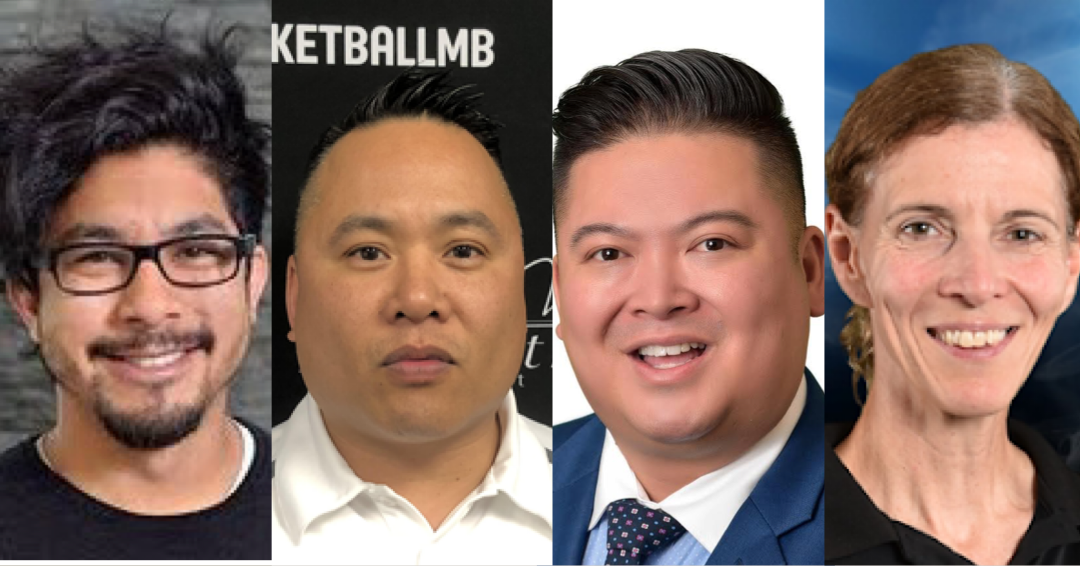 Basketball Manitoba hosted its 45th Annual General Meeting on Tuesday, June 8 and the evening saw the election for its Board of Directors for the upcoming 2021-22 year.  The meeting that was held virtually online saw the re-election of James Dark, Michele Sung and Mike Weekes to another 2 year term along with new members Carter Chen and Sara Gillis (pictured above to the right) being elected by the membership.  All positions are 2-year terms.  Following the AGM, the new Board reappointed Ross Wedlake in the role of President, Mike Weekes in the role of Vice President and James Dark in the role of Treasurer.
Basketball Manitoba would like to thank outgoing Board Members Hector (Chino) Argueta and Ron Guinto (pictured above to the left) for their time and commitment to the organization and sport during their time on the board!
Basketball Manitoba President gave special thanks to Novell Thomas who is leaving his position as head coach of the Brandon University Women's Basketball Head Coach and is returning to his home province of British Columbia this summer.  Novell has been instrumental in growing the level of basketball in the Westman region with the creation of both the Junior Bobcats basketball club and the Westman Youth Basketball Association among many other initiatives.  Thank you and best wishes Novell!

The full Basketball Manitoba Board of Directors for 2021-22 will be... (VIEW BOARD BIOS)

The meeting also saw the formal presentation of the 2020-21 Basketball Manitoba Audited Financial Statement and a number of other reports from the Directors and Staff.  All documents presented at the AGM can be found below.

To close the evening, the group openly discussed the return to play protocols tied to the current pandemic that has closed down all formal basketball activities.

The meeting was attended by representatives from...
You can view the entire AGM Package that was distributed electronically at the meeting below
or by CLICKING HERE...