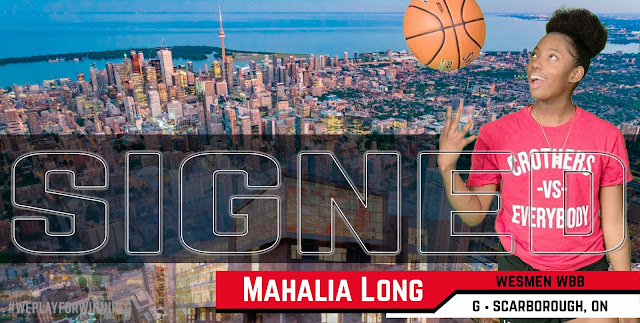 Mahalia Long surprised everyone on her road to recovery, now all paths are leading to Winnipeg for the Toronto-area guard.

Long, a Scarborough, Ont., native and product of Bill Crothers Secondary School has announced her commitment to the Winnipeg Wesmen women's basketball program and is the latest signee in head coach Tanya McKay's 2020 recruiting class.

She will enroll in the Faculty of Psychology and have five years of eligibility.

Long, who played four seasons at the Markham, Ont., prep school, tore her ACL during her Grade 11 year at Crothers, temporarily derailing her journey to post-secondary basketball.

But Long, who is lauded by her prep coach for her work ethic, rehabbed in six months what is typically a one-year process. Now says she's physically better than ever.

"My legs are stronger than ever, especially the one that got injured, it's way stronger," Long said. "Now I'm trying to work on making sure I have equal balance on both legs because now I find that I'm able to jump higher and do more than I could before."

Long said she was pursued by Alberta and Ontario Tech, but took to Winnipeg's offer because of the approach taken by McKay.
"Of all the universities, University of Winnipeg was one that really stood out to me," she said.

"… When I was talking to Tanya, I felt like every question that I asked her she would give me a straight answer … She knew what she wanted, she knew how it would be and what would happen if I do go there, so I was like 'OK, this is where I want to be, this is the type of coach I want to be coaching me and this is somewhere I want to live.'"

Off the court, Long has excelled in the classroom and the community, attaining honour-roll status and participating in the school's Black Student Alliance.

"Mahalia has been a tremendous asset to our basketball program and our whole school community," Gram said. "She leads by example with unwavering commitment and effort and is effective in demanding the same of her teammates. She scores in a variety of ways, and is selfless in accepting other roles that help the team to be successful."

McKay said she was drawn to Long's intensity and work ethic.

"Mahalia comes from a very strong prep school program in Ontario under Coach Gram," McKay said. "A high-intensity guard, Mahalia brings a drive to excel and a skill set that will connect with our transition game. Mahalia will be a great addition — bringing her competitive intensity, athleticism, and refuse-to-lose attitude to the Wesmen."