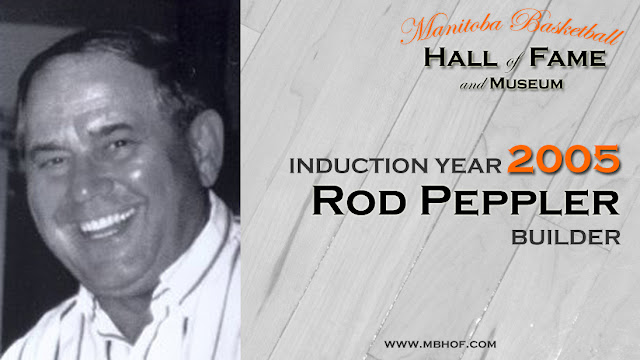 It is with great sadness that Basketball Manitoba shares the news of the passing of long time basketball official and builder Rod Peppler (Class of '05) on June 21, 2020.

Rod began officiating basketball games in 1959 and for over 50 years, he officiated and administered at all levels of play from junior high, high school, university, and adult basketball.

Since the formation of the Manitoba Association of Basketball Officials, Rod has served in various positions on the MABO executive. He has always been a strong proponent of looking outside the province for new information about how to improve officiating in Manitoba. The result was the development of an exchange program with other provinces at the high school and university levels.

In 1974, Rod attended the charter meeting of the Canadian Association of Basketball Officials (CABO) and for a number of years, he served not only as chairman of the awards committee but also as an assignor/evaluator at a variety of national championships.

He continued up until just a few years ago to be heavily involved in the ongoing development of officials in Manitoba. Rod served for many years as the Director of Clinics for MABO and as a board member of Basketball Manitoba, he is responsible for clinics for developing officials throughout the province.

In recognition of his commitment to the development of the sport, Rod was inducted into the Manitoba Basketball Hall of Fame as a Builder in 2005, was named the Sport Manitoba Volunteer of the Year in 2009 and the recipient of the Mike Spack Lifetime Achievement Award in 2017.  He was named an honorary life member of MABO in 2014.

Our thoughts are with the Peppler family.  Additional news of a service will be shared as it becomes known.