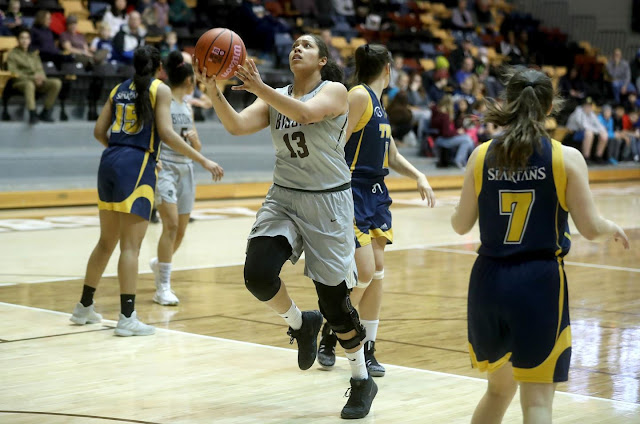 Bisons fourth-year forward Addison Martin was the recipient of the Tracy MacLeod Award at tonight's U SPORTS All-Canadian Gala for men's and women's basketball. The award, which celebrates courage overcoming adversity and was first handed out in 1996-97, is the first in program history for Bisons women's basketball.

Martin, 22, is the national Tracy MacLeod Award recipient after showing her commitment to the game of basketball while persevering with grace through loss and challenge.

In the summer of 2016, Martin suffered the second torn ACL of her career after previously tearing her other ACL during her Grade 11 season. Spending the entire 2016-17 season rehabbing from her injury, Martin has worked tirelessly to return and compete at the highest level. This season, the Winnipeg native averaged 11.6 points per game, while posting 7.8 rebounds per game, 2.9 of those on the offensive end.

Away from basketball, Martin has worked even harder for her family. Following the passing of her mother in early 2017, Martin and her twin sister were forced to find a new home for themselves and their younger brother. Since then, Martin has balanced her studies, sport, and family with a job to ensure her and her family are taken care of.

Her ability to balance a busy schedule and ensure the best for her family has proven to be an inspiration.

"I'm so proud of Addison. She has been handed some extremely hard situations in the last four years but she has managed to stay positive, to be a support to so many others and continues to strive for improvement every day," said Bisons head coach Michele Sung.

"On top of the big picture she has managed to improve every year with us on the basketball court. She had her best statistical year in scoring, rebounding, and steals and we are happy she is getting recognized for her hard work."

The award is named in honour of MacLeod, who broke her leg during a game as a member of the Brandon Bobcats in 1993. Five months after the accident and after numerous surgeries, she had her leg amputated. Defying all odds, she was back on the court less than three months later playing with an artificial limb.

The award was voted on by the U SPORTS Basketball Coaches Association.