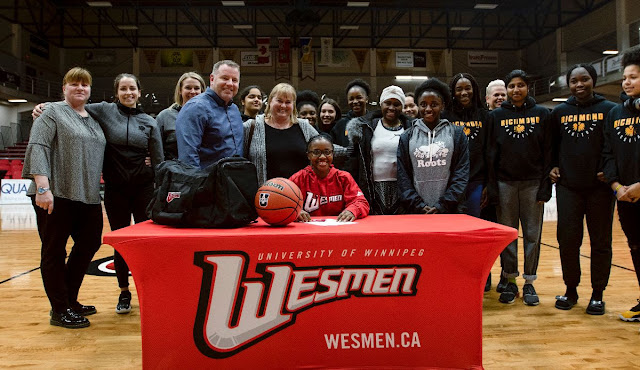 Since before she was in high school, Maltha Uwambajimana dreamed of one day getting the chance to play for the Winnipeg Wesmen.  Starting in the fall, she’ll get to realize that dream.

Uwambajimana (wahm-buh-gee-mah-na), a Grade 12 guard from Fort Richmond Collegiate, has become the latest member of head coach Tanya McKay’s 2020 recruiting class for Wesmen women’s basketball, signing her national letter of intent prior to a recent Wesmen game.  Uwambajimana said she’s known for a few years that UWinnipeg was where she wanted to be.

“In Grade 8 is when I first watched the Wesmen play and ever since then I’ve always wanted to play here,” she said. “I saw the (Manitoba Basketball) Hall of Fame (at the Duckworth Centre) and then I was like ‘Wow, I really want to play here now.’ It’s always been in the back of my mind hoping Tanya would recognize me and hopefully offer me to play for them, so this is very exciting for me.
“I try to contain everything, but I was overjoyed.”

The Centurions are currently the No. 2-ranked AAAA team in the province and they are fueled by the diminutive guard who, despite a 5-foot-3 frame, scores the ball at a high rate.

McKay’s interest in the FRC guard wasn’t a new development, but Uwambajimana moved quickly on her decision to accept the offer to play for the Wesmen. She was offered in January and was signing her letter just a few weeks later.

“She’s tenacious on ‘D’ and she can push the ball on offence,” McKay said. “I think she’s going to bring that speed and smarts. I just think her speed, her quickness, her athleticism just separates her from other guards in her conference. She’s going to bring some really tough guard defence and I think we’re really going to be able to press teams next year.”

Uwambajimana also has a connection to the Wesmen in her high school head coach. Megan Noonan was a two-time all-conference guard who graduated in 2017.

“Marty is the kind of kid that you want to have on your team, and that you want to have as a teammate,” Noonan said. She's fun, she brings energy and enthusiasm to every practice and game, just because she loves the sport. I think the Wesmen will be a perfect fit for Marty next year, and I'm excited to see her hard work and determination pay off at the next level."

A member of the Manitoba provincial program, Uwambajimana was named a 2017 Sport Manitoba Women to Watch athlete grant. 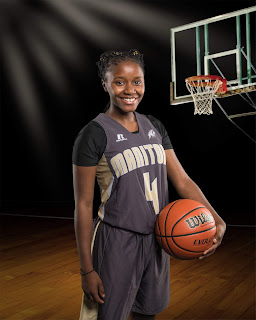