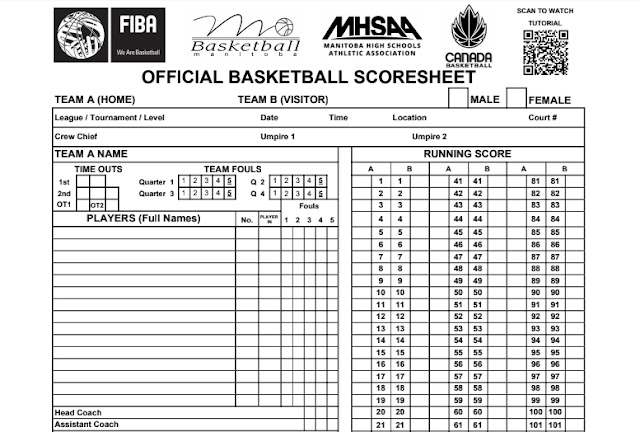 Basketball Manitoba and the Manitoba High Schools Athletic Association have announced a move to adopt the FIBA style scoresheet effective the 2019-20 season.  This will mark the final step to move all levels of play in Manitoba to use the FIBA rules system, which will now include the scoresheet.  All levels of basketball moved to play under the FIBA rules system in 2007 after using the National Federation Rules (NFR) and NCAA systems up until then.  At the time, the scoresheet format used was left to continue using the old NFR style until now.

The move coincides with the adoption of the new FIBA floor markings which were adopted 3 years ago and will take effect this season as well.

As part of the change of the scoresheet, Basketball Manitoba has updated its Minor Officials Video Series to reflect using the new scoresheet which can be found below or at this link.  On the 4th page of the newly printed scoresheet, there is also a tutorial page of how a properly completed scoresheet should look with a number of tips and pointers that can be used by the scorer.

As many schools and clubs may still have stock of the old scoresheets, it's not expected that they are discarded as there will be a slow transition made to the new sheet.  Effective this year, Basketball Manitoba and the MHSAA will only be selling the new scoresheets from their offices.

The change to the new scoresheet comes after a number of years of consultations with the Basketball Manitoba Technical Committee, MABO, StatTrackers and others.  A successful trial of using the new scoresheet was also completed this past spring at the Basketball Manitoba Club Championships.  Feedback from the scorers was very positive as the new sheet is easier to complete and has less room for error.

You can order the new scoresheet from the Basketball Manitoba Store now.