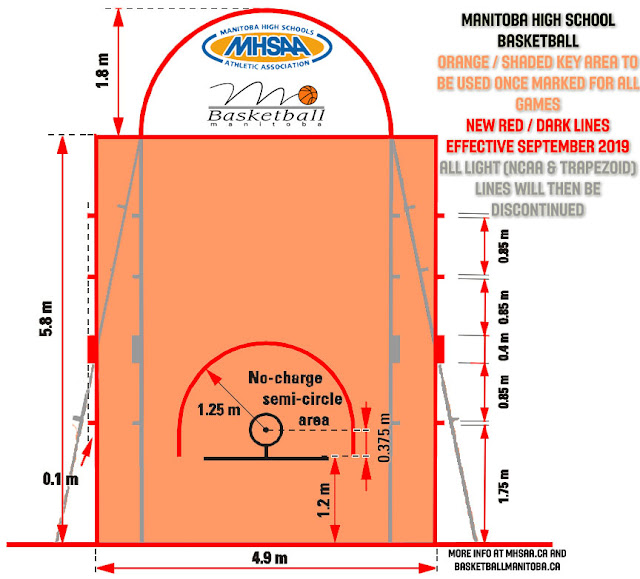 STARTS THIS SEASON AT HIGH SCHOOL LEVEL: The MHSAA has adopted a proposal put forward by the Basketball Manitoba Technical Committee to begin the transition to the new court markings to be in place by the 2019-20 season.  The lines that will be transitioned to include the 4.9m rectangle (NBA style key) and no-charge semi-circle.  The current 3 point line of 6.25m will still be used with the 'new' line set at 6.75m being used at the post-secondary (CIS & MCAC) levels only.

Please note the above illustration of the floor colouring is to show the line specifications only.  Facility managers can select any colour combination that best suits the facility so long as it contrasts with the floor surface and is highly visible.

The proposal that was adopted stated the following...

BASKETBALL FIBA LINES PROPOSAL - SPRING 2016
In an effort to keep the sport of basketball in Manitoba reflective of the current FIBA rulebook and to facilitate greater consistency in both how the game is played and officiated, the Basketball Manitoba Technical Committee recommends that all court markings and scoring equipment located in Manitoba adhere to the following specifications:

The Basketball Manitoba Technical Committee recommends that the MCAC adopt the lines in the current FIBA Rulebook which include the 4.9m wide restricted area, 6.75m 3-point line and 1.25m ‘no-charge semicircle’ effective the 2016-17 season. It is also recommended that the MCAC adopt the 14-second shot clock reset for the 2017-18 season which requires an upgrade of the timing equipment to allow for this reset.

The CIS adopted the new lines for the 2014-15 season and the new 14-second offensive rebound shot clock reset for the 2015-16 season.  These new lines were announced by FIBA in 2010.  Manitoba at all levels moved to the FIBA rule system in 2007. 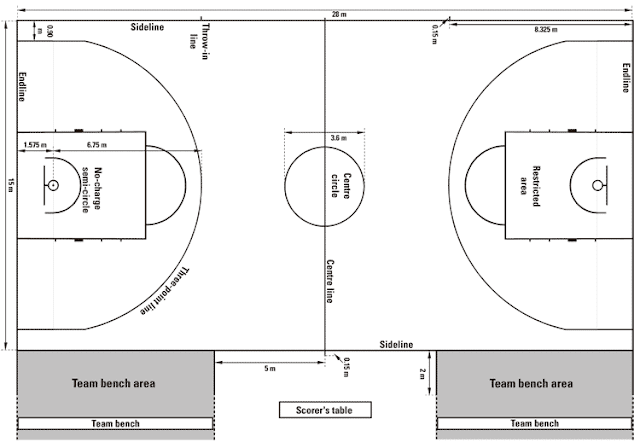