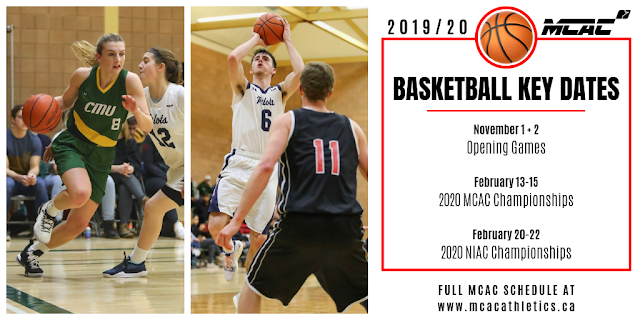 The full basketball schedules can be found at http://www.mcacathletics.ca.

Three Teams, Two Conferences
The Canadian Mennonite University Blazers will compete in the NIAC for the fourth straight season while the Providence University College Pilots and Red River College Rebels will be playing in their third seasons with the conference. The three Canadian teams will continue to play for the MCAC Championship in addition to the NIAC Championship.

NIAC Championships
The 2020 NIAC Championships will take place the weekend following the MCAC Championships from February 20-22 with times and location to be determined. The PUC Pilots women’s team will look to defend their NIAC title this season after defeating the Trinity Bible College Lions 73-60 in the 2019 championship.

About the MCAC
The MCAC is the governing body for intercollegiate athletics in Manitoba. Its mission is to foster the development of the student-athlete through the administration and promotion of intercollegiate athletics as part of the education experience and provide a leadership role in the development of sport in Manitoba. The MCAC is also a proud member of Canadian Collegiate Athletic Association (CCAA).