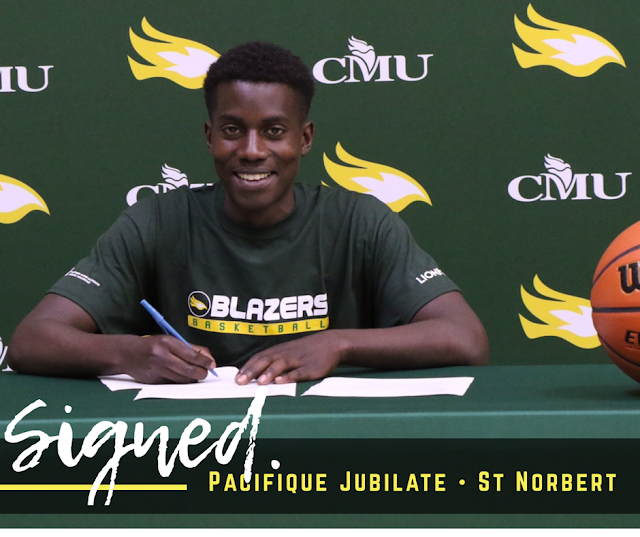 After leading St. Norbert Collegiate to an SCAC Championship and a Manitoba 'AAA' Provincial Finals, Pacifique Jubilate will be making his move into college basketball this September after signing his letter of intent with the CMU Blazers.

"Pacifique is a phenomenal athlete and an even better person. He was an absolute pleasure to coach," said Jubilate's high school coach, Colten Gryba. "His ability to get to the rim and defend will be big assets for him at the next level. CMU is getting an amazing young man and a great basketball player."

Jubilate averaged 22 points per game while adding 8 rebounds and 5 steals for the Celtics in his grade 12 season earning him provincial all-star honours. Then the 6'1 guard would close out his high school career by being selected to the 2019 Basketball Manitoba Graduating All-star Game where Jubilate was recognized among the province's elite on 2nd team All-Manitoba.

New Blazers' head coach Scott Martin is excited for the opportunity to work with Jubilate and sees him as an asset to his young roster; "Pacifique is very athletic. He plays with a high motor and should be ready to step onto the court and contribute for us right away."

CMU's Northern Intercollegiate Men's Basketball schedule was released by the MCAC last Monday. Prior to beginning conference action, the Blazers will travel to Alberta for western preseason action against the ACAC's St. Mary's Lightning, Ambrose Lions and Olds Broncos before returning to Manitoba for five more preseason games – October 16th and 24th versus the Providence Pilots, October 18th at the Red River Rebels and a home weekend series November 1st and 2nd against the Turtle Mountain Mighty Mikinocks. CMU begin the 2019-20 NIAC regular season November 8th and 9th on the road in Ellendale, North Dakota against the Trinity Lions.