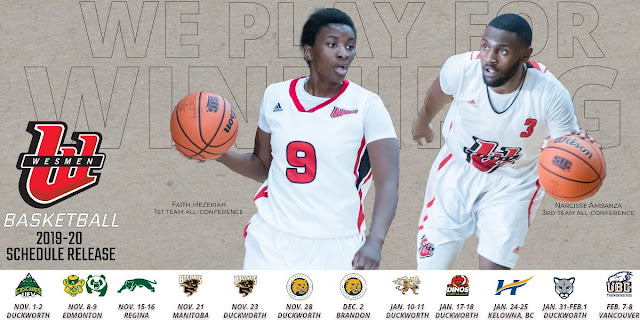 Winnipeg Wesmen basketball teams will play six of their final 10 Canada West conference games on home floor, it was revealed on Tuesday.

The UWinnipeg men and women, who will open the conference season on their home floor, will be at the Duckworth Centre for three of the five weekends in the second semester it was revealed as the conference unveiled its 2019-20 schedules.

The Wesmen get to kick off the new season with games against the Fraser Valley Cascades Nov. 1-2 at the Duckworth Centre. It is the first time the Cascades have come to Winnipeg for a conference game since Jan. 10, 2014. UFV's men's team played a non-conference game at the Duckworth in October 2015, and the Wesmen men swept the Cascades in a best-of-three first-round playoff series in Winnipeg in February 2017.

Winnipeg will get the benefit of three home series in the second semester, including back-to-back weekends against MacEwan (Jan. 10-11) and Calgary (Jan. 17-18) that will usher in the 2020 portion of the schedule.

The crosstown rivalry games with Manitoba will both take place in the first semester. The Wesmen will host the Bisons on Nov. 21 and then play the annual Duckworth Challenge games at U of M on Nov. 23.

The Wesmen and intra-provincial rival Brandon Bobcats will meet the following week with a home-and-home series that starts Nov. 28 at the Duckworth Centre and concludes with a rare Monday tip, Dec. 2 in Brandon.

The Wesmen will make two trips over the mountains -- heading to UBC-Okanagan in Kelowna, B.C., Jan. 24-25 and again Feb. 7-8 for a road trip to UBC. The only other air-travel trip will be a Nov. 8-9 weekend at Alberta.