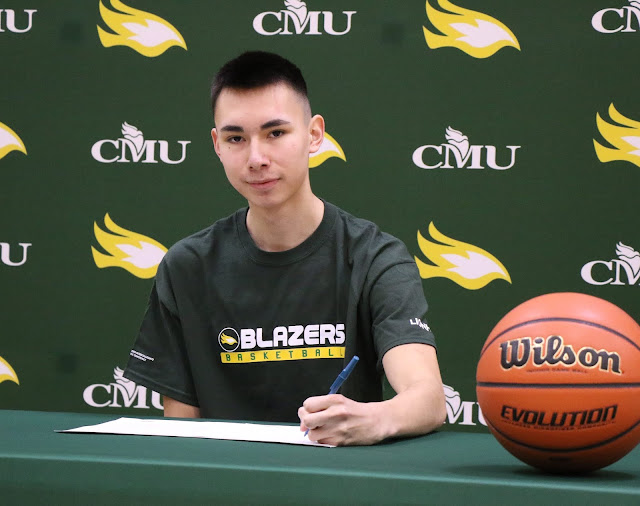 Men's Basketball head coach Scott Martin believes the sky is the limit for The Pas' Chance Leader who helped his high school, Margaret Barbour Collegiate, to a Zone 11 Championship earlier this year. "Chance was actually the first player that I connected with about joining us at CMU after being hired in April," said Martin. "So it is great to have things finalized now and have him signed." The lanky 6'4 forward also led the Trojans to a first-place finish at the Bill McDonald Tournament with Leader coming away with Most Valuable Player honours.

Martin describes Leader as; "A player with a lot of potential to develop his game. Chance has good height and soft touch for a big man."

The accolades only continued for Leader in his final year of high school, earning a Tournament All-star selection in Swan River, another Most Valuable Player award at the Dauphin Regional Tournament, a Player of the Game recognition for the Trojans in the 2019 'AAA' Boys Provincials and finally, the opportunity to participate in the 'A-AAA' Graduating All-star game.

"Chance's court IQ and ability to finish at the rim, speaks for itself", said Leader's club and high school coach Matt Hagborg. "He made a huge jump in his game from his Grade 11 to senior year. He could always slash to the rim and finish through contact, but now he has added a jumper and solid defense to his bag of tricks."

The Trojans captain averaged 20 points, 7 rebounds, 6 assists and 3 blocks in his final season with Margaret Barbour, saving his best performance for the Provincials when Leader scored a career-high 35 against St. James Collegiate, missing only once from beyond the 3-point line in 9 attempts.

"Even though a scorer, Chance is a team player," added Hagborg. "He went from being a go-to guy in grade 11 to working in a system in grade 12, taking a smaller role with less touches, and was able to put his trust in his teammates."

Men's Basketball begins their 2019-20 preseason schedule October 4-6th on a tour of three ACAC south division opponents. On Friday, CMU challenge the St. Mary's University Lightning in Calgary, followed by a Saturday afternoon meeting with Ambrose University Lions. The Blazers wrap up their road trip on on October 6th, up the road in Olds against the Olds College Broncos.