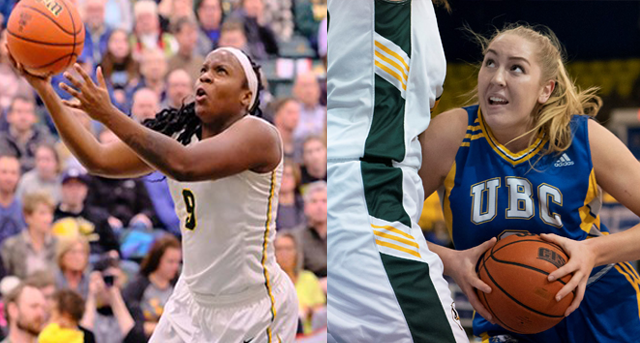 Giles enjoyed a spectacular third season with the Cougars, averaging a team-high 18.4 points and 8.8 rebounds per game. The Winnipeg product also finished second in the conference with 2.6 steals per game while leading the Cougars to a conference-best 17-3 regular season record.

"It means a lot to be recognized, obviously. My hard work is paying off and it shows that I'm getting better and better each year," Giles said on Wednesday. "My points and rebounds have gone up from my first to my third year but I really feel like my overall game has gotten so much better. It's nice to be named an All-Canadian and getting the recognition makes me work harder and strive to get even better."

Filewich had an outstanding season finishing fourth in Canada West conference points (369), third in blocks (22), first in offensive rebounds (86), and tops in shooting percentage at 60.3%. This is Filewich's second appearance as an all-star after being named to the conference's all-rookie team in 2016-17.

Both players were honoured last month along with Wesmen Faith Hezekiah by Canada West all being named as First Team All-Stars.

Both players had outstanding basketball careers while in Manitoba at Sisler (Giles) and Vincent Massey (Filewich) and were members of the Manitoba Provincial Team program and both have attended a number of National Team identification camps.