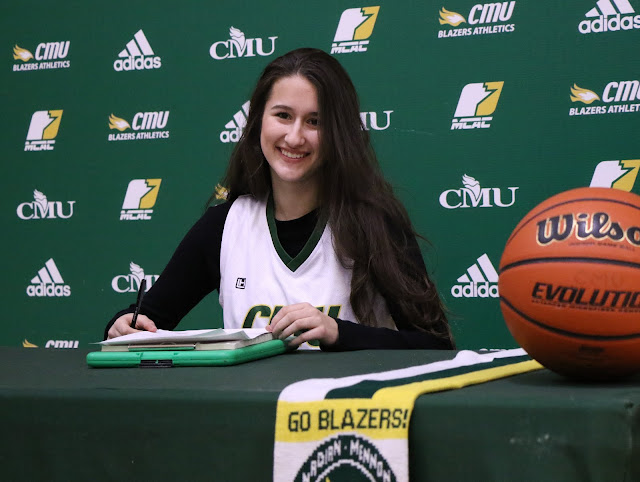 Canadain Mennonite University's women's basketball program has announced the signing of Collége Jeanne-Sauvé and Manitoba Magic guard Anna Pyne for the 2019-20 NIAC season. Able to score to fill the stat sheet offensively, the 5'6 point guard cashed in an amazing career-high 62 points in one game in her Grade 11 season with the Olympiens and Pyne's high school coach, Sonia Radi believes that she can make a big impact for the Blazers next season.

"Anna has been an integral part of our program for the past four years," said Radi, herself a former MCAC All-Conference selection during her college career. "She works hard and always wants to get better. Her resiliency and competitiveness have carried us through some tough games over the years. She is an impact player that will make a huge difference anywhere she goes and I am excited for her to join the CMU program."

Pyne has averaged 20 points per game with 5 assists, 5 steals and 5 rebounds in her Grade 12 year. Jeanne-Suavé counted a second-place finish in the St. Mary's Academy Tournament where Pyne was an all-star selection and third-place in the Sturgeon Heights Tournament. Last week the Olympiens ended their SCAC season with a third-place finish behind divisional powerhouses Dakota and Glenlawn where the point guard earned her MHSAA career with a fourth SCAC all-star selection.

After moving to Manitoba from New Brunswick, Pyne planted herself with the Manitoba Magic club program. With the Magic, Pyne won the Edmonton Swoosh Tournament in 2017 and won the Consolation Final at Canadian Club Nationals in Vancouver. In 2018, Pyne won the PBA Championship (Philippine Basketball Association) where the 17-year-old finished as the league's second-highest scorer, averaging 19.7 points per game.

"Anna is a terrific scorer that will be a big threat for us from three-point range," said CMU head coach Joe Di Curzio. "She is a point guard with a basketball IQ that is off the charts – she really understands the game well! We are very excited to welcome her to the program we look forward to having her in our lineup next season."

Visit back regularly this spring and summer to read more about new CMU Blazer student-athletes signing for the 2018-19 Northern Intercollegiate Athletic Conference season.