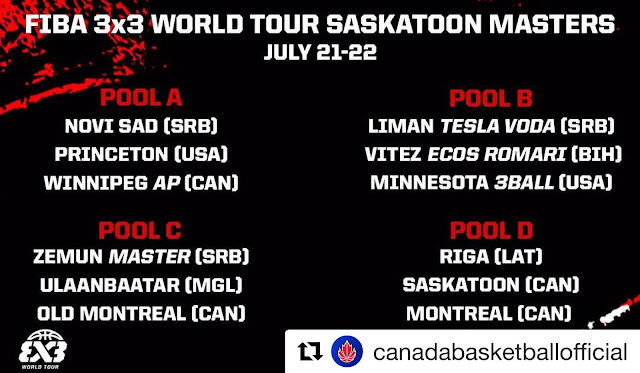 Team Winnipeg is off to the FIBA 3x3 World Tour Maters Saskatoon stop this weekend after finishing 2nd overall in the nation at the Canada Quest 3x3 Championships earlier this month.  Team members include Wyatt Anders, Jelane Pryce, O'Neil Gordon and Ayob Ayob.


Toronto and Winnipeg, along with Team Montreal, earned berths into the FIBA 3x3 World Tour 2018 Saskatoon Masters. Team Saskatoon previously qualified for the event based on their world ranking from last season.

The FIBA 3x3 World Tour 2018 Saskatoon Masters, once again hosted in conjunction with Taste of Saskatchewan on July 21 - 22, 2018, will kick off the World Tour season and be comprised of 12 teams of four players from around the world participating in a two-day tournament.

Winnipeg will open against the top ranked 3x3 team in the world, Novi Sad from Serbia at 1:30 pm Saturday then play Princeton USA at 3:10 pm (both Manitoba times).  The top 2 teams from pool play will move on to the brackets on Sunday

View all
In addition to the main event, a dunk contest and a shoot-out contest will take place in between games. Live music, cheerleaders, dance teams and other entertainment will be held throughout the weekend. An amateur 3x3 tournament is also being planned to take place on satellite courts alongside the FIBA 3x3 World Tour Masters.


All games will be live streamed on the FIBA 3x3 YouTube channel.

CONGRATS AND GOOD LUCK TO TEAM WINNIPEG IN SASKATOON!