PUBLISHED ON July 30, 2018 Headlines,
On behalf of the Manitoba basketball community, Basketball Manitoba would like to wish a fond farewell and huge thank you to basketball coach Herve Vincent who recently moved away from Winnipeg last month to his new home in Montreal. 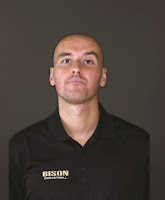 Herve was a very active person in the basketball community and managed the Junior Bison Boys Basketball Club along with coaching a number of the club's teams.  He led a number of his 'Attack Mode' basketball camps over the years and was involved in a number of other aspects of the game including as an assistant coach with the University of Manitoba Men's Basketball Team, the Centre for Performance Program, SWISH Basketball, Jr NBA, 3x3 tournaments and more.

Herve was born and raised in France where his dedication to the game began in 1988 when he joined a basketball club. He has been involved in coaching since 1997 where he started as a volunteer and became a certified coach in 2005. He earned his degrees in sociology, education and sports training at the University of Rouen (France).  More...


His passion of the outdoor game is second to none and has visited and documented outdoor basketball courts from around the world on his blog and more recently on his Instagram page.

He will be missed and we wish him nothing but the best with his new life in Quebec!