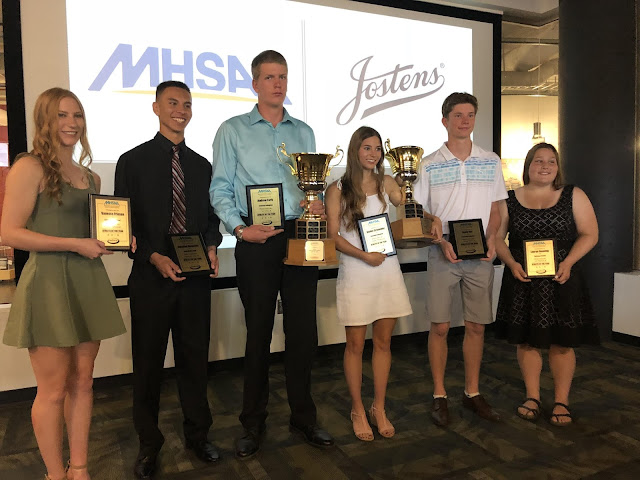 The Manitoba High Schools Athletic Association, with support from Jostens has announced the 2018 Jostens High School Athletes of the Year today at the Manitoba Sports Hall of Fame.

Lauryn Dunning of McCreary School – participated in golf, soccer, volleyball, basketball, curling, badminton, baseball and track & field. She was the team captain of her soccer team and led them to a divisional win. She was also the captain of her volleyball team, who won the divisional championship. Lauryn went undefeated in regular season play in badminton and went on to Provincial Championships. Along with her athletics she was also student council president, social justice club student leader, valedictorian, member of the yearbook committee, volunteered in the community gardens and local food bank, and was a tutor at school. Lauryn is very active in her community being involved in curling bonspiels, coaching minor hockey and peewee baseball. She has also volunteered for Meals on Wheels and the community fundraiser for food hampers. She did all this while maintaining an academic average of 93.5%.

Vanessa Friesen of Green Valley School (Grunthal) – maintained an academic average of 85% while participating in volleyball, basketball, fast pitch, and track and field. She was co-captain of both her volleyball and basketball team as well as being chosen by her peers at the Provincial Volleyball Championships for the Players Choice Award, in addition to being named as a game star and tournament all-star. In track & field she received a gold in the 100m and triple jump, as well as a silver in the 200m at her Zone Championships. Vanessa assisted with scorekeeping and refereeing and is also a school tutor and mentor. She was the driving force in collecting a “tin for the bin” fundraiser and oversaw painting the grad mural on the wall of her school. She was involved in club volleyball, volunteered at the 2017 Canada Summer Games and was named “Sport Star of the Month” by the Steinbach radio Station.

Amber Schneider of Stonewall Collegiate – participated in cross country, volleyball, basketball, fast pitch, and track and field. She placed 4th at the Provincial Cross Country Championships, was the captain of her basketball team and the stop scorer in most of their games. She was chosen as a tournament all- star as well as a graduating all- star. This 5’4” fast pitch and track athlete helped lead the Rams fast pitch team to a Provincial Championship where she was named MVP. She followed that up a week later at the MILK Provincial Track & Field Championships where she earned silver medals in the 400m and 800m events, while also anchoring the Rams 4 x 400m relay team to a silver medal. Amber participated in the MHSAA Captains Workshop and the link leader mentorship program at her school. She is a softball and hockey coach in the community and volunteers at Siloam Mission all while achieving an academic average of 80.5%.

Andrew Early of Treherne Collegiate – participated in volleyball, basketball, curling, cross country and track & field. He was the skip of his curling team, and co-captain of both his volleyball and basketball teams. He was a provincial and graduating all-star for both volleyball and basketball and led his volleyball team to a bronze medal at the Provincials and a silver medal in basketball. He participated in the school’s volunteer program where they lend a helping hand around the community. He is an avid 4H program volunteer and volunteers at the Holland Ag Society where you can find him preparing the fairgrounds for various events. He does all this while maintaining and academic average of 81%.

Scott Yeo of Stonewall Collegiate – participated in volleyball, basketball, soccer, baseball, golf, badminton, cross country, and track & field. He was the captain of his volleyball and basketball teams and led his volleyball team to the Provincial Championships. He was a Zone Champion in cross country, golf and soccer. He is a member of the link leader mentorship program, attended the MHSAA Captains Workshop, is a member of the American History travel group and participated in the Hoops for Hope cancer care fundraiser as well as the Passing on the Cheer volleyball fundraiser for the Christmas Cheer Board. He coaches grade 7 and 8 volleyball and volunteers with the SwimAbility Manitoba, all while maintaining an academic average of 90%.

Cassius Meeches of Sisler High School – maintained an academic average of 90% while participating in football, hockey, basketball and track & field. He was the starting defensive back and leader on his football team and was recognized as the “Hardest Working”. In hockey, he was team captain and an WHSHL all-star. He was a team starter for basketball and helped his team to the Provincial Championship final four. He holds the Provincial track record in the Pentathlon and is the recipient of the school’s grade 12 athlete of the year. Cassius is a peer tutor in math and part of the French immersion program. He is a referee with Football Manitoba and has facilitated lessons and workshops related to healthy relationships, consent and wellness.

The 2018 overall Jostens High School Male and Female Athletes of the Year are: