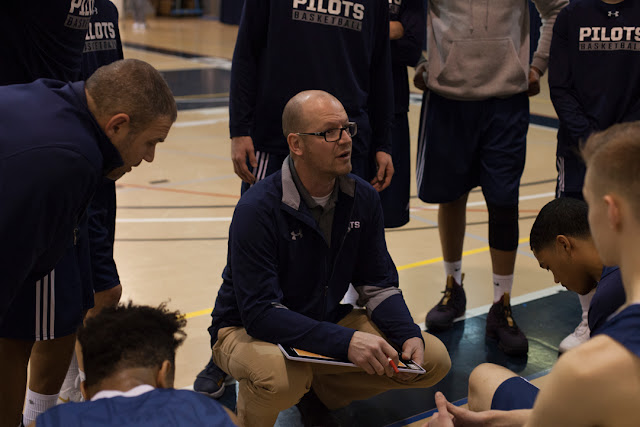 This past season the Pilots further changed course, winding up with 17 wins and 15 losses. They finished third in MCAC, third in the NCCAA North Region and eighth at the ACCA National Tournament. Friesen coached three NCCAA All-Region Team members, one NCCAA All-American, two ACCA All-Americans and three Northern Intercollegiate Athletic Conference All-Conference players. Friesen was also named NCCAA North Region Coach of the Year for 2017-18.
“It has been an honour to be able to serve as head coach of the Providence Pilots men’s basketball team for the last two years,” said Friesen. “I have thoroughly enjoyed the relationships that have developed over the past two years with the players, the other Pilots coaches and opposing coaches. I will miss the competition, the time in the gym and mostly watching the relationships develop. But I am looking forward to having more time to spend with my family and watching—and coaching—my own children as they pursue their athletic and musical interests.”
Scott Masterson, Providence Director of Athletics, said it was great having Friesen back coaching, the latter having previously worked with the men’s basketball team from 2003-2006.
“He has a wealth of experience and was able to make a significant impact on the players, and the program, in these two years he was involved,” remarked Masterson. “We are definitely sad to see him step away at this time, but I have the utmost respect for him in making the decision he has made in order to spend more time with his family.”
Masterson points out that Providence has immediately opened up the position of Men’s Basketball Head Coach and will be accepting applications until the position has been filled. All applicants can apply by sending a cover letter and resume by email to hr@prov.ca. For the full job posting, applicants can visit the Providence website.
Masterson notes that Providence is looking to fill this position quickly as next year’s roster needs to be solidified as soon as possible. There are also many potential recruits who would like to meet the new coach.
Providence men’s basketball will host an Identification Camp on Saturday, May 26 on the Otterburne, M.B. campus. Sessions will take place at 1:00 p.m. and 3:00 p.m. Anyone interested in attending should contact the Men’s Basketball Recruitment Officer, RJ Mackenzie, at RJ.MacKenzie@provca.
Providence is a Christ-centred institution that offers numerous degree programs, including Aviation, Business Administration, Science, Communications & Media, Sociology and Psychology.
Pilots basketball teams compete in the Manitoba Colleges Athletic Conference (MCAC), the Northern Intercollegiate Athletic Conference (NIAC) and the National Christian Colleges Athletic Association (NCCAA).