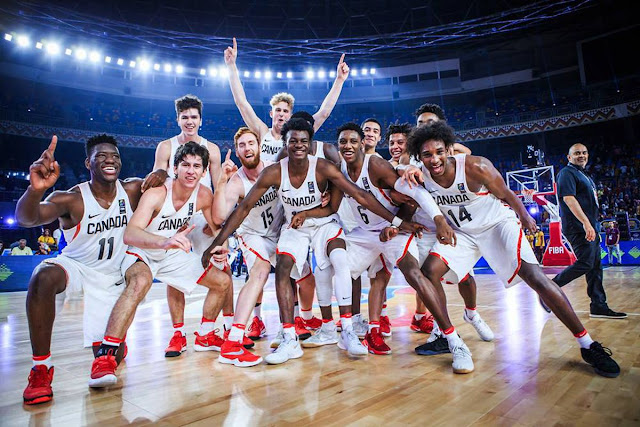 TORONTO, ON (May 10, 2018) - Following a historic summer, Canada's youth men have risen to a program-high No. 2 in the FIBA World Ranking presented by Nike.

When the revised rankings were revealed earlier this week following the completion of the FIBA U16 Asia Championship 2017 2018, Canada moved past Lithuania and now trails only the United States. The improvement in ranking was sparked by the accomplishments of the U16 and the U19 teams this past summer.

Canada's climb up the rankings can be largely attributed to the team's historic finish at the FIBA U19 Basketball World Cup 2017.  Canada defeated Italy, 79-60, in the finals as the country captured the first-ever gold medal at an international FIBA competition. The tournament also saw Canada earn a monumental 99-77 victory over the United States in the semifinals, leading to their eventual gold medal.

At the FIBA U16 Americas Championship 2017, Canada earned a silver medal in the tournament after falling to the United States in the finals. As a result of their second-place finish, Canada officially qualified for the FIBA U17 Basketball World Cup 2018 which will take place later this summer.

This past summer was filled with successes for Canada's youth men's teams and they will look to replicate that same success this summer.  Canada will host the FIBA U18 Americas Championship 2018 at the Meridian Centre in St. Catharines, ON, while the U17 team will travel to Argentina for the FIBA U17 Basketball World Cup 2018.

The FIBA U18 Americas Championship 2018 will no doubt be a pivotal tournament for the national team, not only because Canada is hosting it, but because of the opportunity the tournament poses going into next summer. The seven-day tournament sees the top eight teams from the FIBA Americas zone vying for a top-four finish to qualify for the FIBA U19 World Cup 2019.

Canada has met the United States in each of the last two tournaments in 2014 and 2016, earning a silver in both appearances. Canada will look to utilize the homecourt advantage and end United States' four-year reign.

St. Catharines, the host city for the tournament, is known as a premier tourist destination synonymous with scenic beauty and sports excellence.  The world-class Meridian Centre will play host to the bi-annual event taking place June 10-16, 2018.

Approximately a month later, Canada will travel to Rosario and Santa Fe, Argentina in order to take part in the FIBA U17 Basketball World Cup 2018 (July 21-29, 2018). The United States has earned a gold medal in each of the past four tournaments since 2010, however, after earning a silver this past summer, Canada will look to carry that momentum into Argentina this year and earn the gold.

Canada's highest finish at the tournament was a bronze medal at 2010 FIBA U17 World Championship for Men.