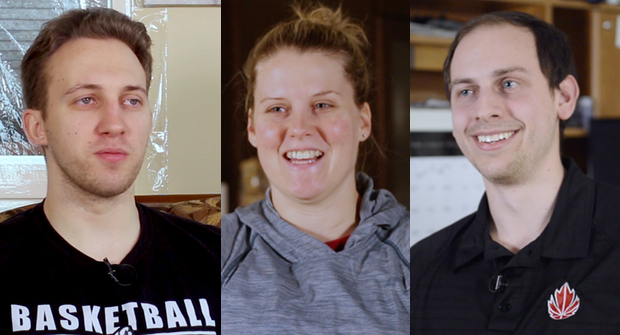 Basketball Manitoba is pleased to share a new 'Coach Spotlight' video series created by Neil Noonan that tells the stories of three local basketball coaches including where they started, their influences, and what’s next in their journey.  The 3 videos focus on Wesmen Assistant Coach and 2017 15U Manitoba Provincial Team Coach Jon Giesbrecht, Manitoba Bison Head Coach Michele Sung (Hynes) and current 15U Female Manitoba Provincial Team and Fort Richmond Collegiate Coach Stephen Ralko.

See all the videos either below on on the Basketball Manitoba YouTube page.  Special thanks to Neil for is work on this project and for allowing us to help share the videos with the basketball community.

Jon’s a big brother, NBA & D1 coaching prospect, and an assistant coach of the University of Winnipeg Wesmen men’s basketball team. Jon began his coaching career as early as some start playing. By crafting his talents of skill development and film work, Jon has caught the attention of some big names and programs.

Michele’s a future mother, avid golfer, and the head coach of the University of Manitoba Bisons women’s basketball team. From starting point guard to lead chair, Michele’s journey through basketball has been full of supportive role models both on and off the court – some help with practices plans, some help with her golf swing.

Stephen’s a mentor, physical education teacher, and the head coach for the Fort Richmond Collegiate JV boys’ basketball team. Stephen grew up familiar with the bench, but that didn’t stop him from absorbing everything his coaches gave him and following in their footsteps on the court and in the classroom.