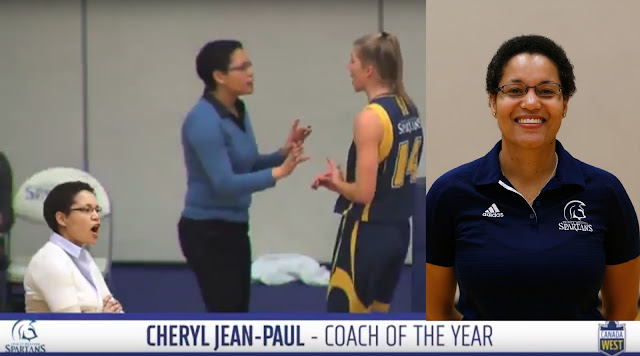 For the first time in program history, the Trinity Western Spartans can claim the CW Coach of the Year as their own.   Head coach Cheryl Jean-Paul, from Winnipeg, Manitoba, has been voted the conference’s top coach by her colleagues, as the Winnipeg native guided TWU to a 16-4 regular season – the best result in program history.

Jean-Paul, who joined the Spartans in 2010, enjoyed the best season of her coaching career in 2017-18, as TWU doubled their win total from just two years ago, as the program continued their trip up the conference pecking order.

“I am thrilled that Cheryl's hard work and commitment to the process of excellence has been recognized with this award. Cheryl embodies everything about the Complete Champion Approach, as she is fully committed to providing her players with an environment that supports them spiritually, athletically, academically and socially. Cheryl is a lifelong learner who has been humble enough to work with a team of people to accomplish the results the team has achieved.” – Jeff Gamache, TWU Athletic Director

She has also taken the TWU women’s basketball team on three service and missions trips, going to New Orleans in 2012, Paraguay in 2014 and Winnipeg in 2017.

Prior to joining the Spartans, Jean-Paul had over 10 years of coaching experience and a wealth of playing experience.

She spent three years as head coach at Red River College where she won a Manitoba Colleges Athletic Conference title in 2009. Prior to that, she also won three consecutive conference championships and a provincial bronze medal as the head coach of the River East Collegiate junior varsity team. She was also an assistant coach with the University of Manitoba Bisons women’s basketball team for two years.

Jean-Paul was the head coach for Manitoba’s 2009 Canada Games U17 girls’ team and was the women’s head coach for the Manitoba Region of Canada Basketball’s Centre for Performance program.

Jean-Paul is a Level III NCCP certified coach as well as a Master Learning Facilitator for the NCCP Intro to Competition basketball coaching course. She has been recognized for her coaching abilities by being awarded the Jim Bulloch award by the Manitoba Basketball Coaches Association as well as being a Finalist for the Coaching Manitoba High Performance Coach of the Year award.

In 2009, the Winnipeg native travelled to Zambia and Rwanda to observe and to help their national sporting organizations develop their programming and their pursuit of athletic excellence.

As a five-year player with the University of Manitoba, Jean-Paul earned all-star and MVP honours (1999-2000) with the Bisons, a U SPORTS silver medal and a GPAC conference championship in 1998. Jean-Paul scored over 1000 points in her five-year career and was consistently among the conference leaders in free throw percentage and steals. In 1999, she was involved in an Athletes in Action European tour team that travelled to Switzerland & Slovakia.

Jean-Paul, who graduated from the University of Manitoba in 2005 with a Bachelor of Science degree, is also a level two basketball official who has over eight years of officiating experience, including refereeing in U SPORTS, the Manitoba provincial championships and at the 15U girls’ nationals.