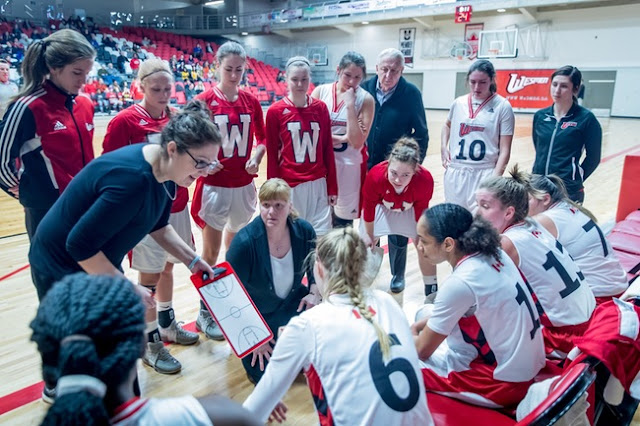 The Winnipeg Wesmen are going into their next playoff challenge knowing they're the underdogs, and they're just fine with that.

The Wesmen women's basketball team will fly to Saskatoon Wednesday for a best-of-three Canada West quarter-final series with the Saskatchewan Huskies next on what they hope is a playoff road that still has some miles left on it.

The challenge, however, is real: The No. 2-seeded Huskies come into the series that starts Thursday with a 17-3 record and a week off to prepare. They also bring size and arguably the most efficient offence in Canada West.

Recognizing all of that, however, head coach Tanya McKay is nevertheless comfortable with turning the tables on to the host Huskies.

"The pressure's on (the Huskies)," McKay said Wednesday before the team was to depart for Saskatoon. "They're No. 2. They're expected to be in the Final Four, they're expected to be at nationals. I think they're the ones that have to step up and prove they belong in the Final Four. I think if our kids just go in and play with courage and determination we give ourselves an opportunity. Anything can happen."

The Huskies are second in Canada West scoring at 82.2 points per game, but first in the conference – and U SPORTS – in field-goal percentage at 44 per cent. That is in large part due to 6-foot-2 post Summer Masikewich, a second-year post who shoots nearly 60 per cent from the field.

The Huskies also shoot the three better than anyone in Canada, knocking down 36.4 per cent of their perimeter tries. It's something the two teams have in common – both can knock it down – but it's most certainly got the attention of the Wesmen in their preparations for slowing what Saskatchewan wants to do.

"They've got a couple kids that can knock down shots at any time, so they've got a lot of kids that we've got to pay attention to," McKay said. "If we can defend well as a team then maybe we can contain them a little bit. … We need to play well on defence in order to give ourselves an opportunity to get looks at the other end."

The series will also be a return of sorts for fifth-year senior point guard Antoinette Miller, who spent a year on the Huskies before transferring out. Miller said last week she was excited to prove something there this week, and McKay knows she needs no extra motivation.

"I think for Ant it's deeper than that," McKay said. "Ant knows that this is her last run at university basketball, so she's gonna come and play, she's going to do what she needs to do. She knows that beyond U SPORTS is going to be pro somewhere and so she wants to leave her mark, she wants to try to help our program get back to the Final Four, get back to nationals. She wants to continue that until it's over. She'll be ready to play. She knows how to get ready for games."

In two career games against Saskatchewan, Miller has averaged 24.5 points on 59 per cent shooting.

Thursday and Friday's games tip at 7 p.m. CT. Game 3, if necessary, will go Saturday at 7. All games can be streamed on canadawest.tv.