Bison Men’s Basketball Head to No. 4 UBC in Canada West Quarter-Finals This Weekend 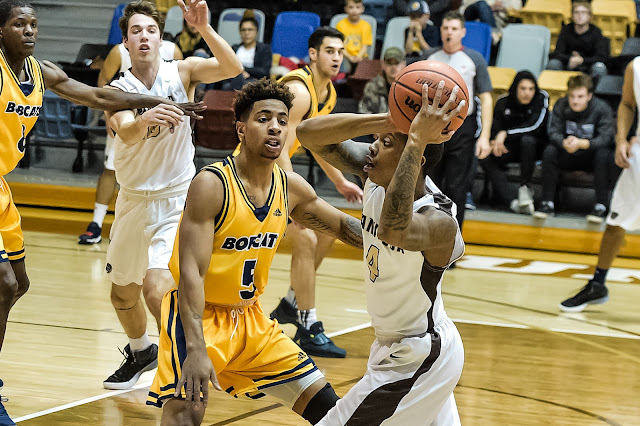 The Manitoba Bisons (regular season: 12-8; playoffs: 1-0) advanced to the Canada West men’s basketball Quarter-final, for the third consecutive season, after a Play-In home playoff game win of 82-76 over Brandon on Feb. 9.

Manitoba, the seventh seed, travel to play No. 4 and third seed UBC Thunderbirds (17-3) in the Canada West Quarter-final best-of-three playoff series played on the February 15-17 weekend. Games will be live on canadawest.tv (fee req'd).

During this season, Manitoba and UBC did not meet in conference action.

Manitoba is on a three game winning streak as they swept the Fraser Valley Cascades (W 67-46 on Feb. 2; W 82-66 on Feb. 3) to end CW regular season and then beat Brandon in the playoffs.

Manitoba seeks to advance to their third consecutive conference semi final with a series win versus UBC.

Individually, co-captain Justus Alleyn was first place in conference scoring at 24.1 points per game while James Wagner is eighth in CW scoring at 18.6. In Canada West minutes played, Alleyn ended up third at 35.6, Rashawn Browne sixth at 34.8 while Wagner was sixth with 33.9. Alleyn finished fourth at 42.3% while Brown is tenth at 41.7 and Wagner was eighth at 41.5% in 3-point percentage. In rebounds per game, Wagner is 11th with 7.6. Browne led the conference in assists per game at 6.8. Alleyn was T-9th with 1.9 steals per game plus in blocks per game, Wagner tied for sixth with 1.1 and Cameron O’Hara was tied for ninth at 0.8 CW blocks per game.