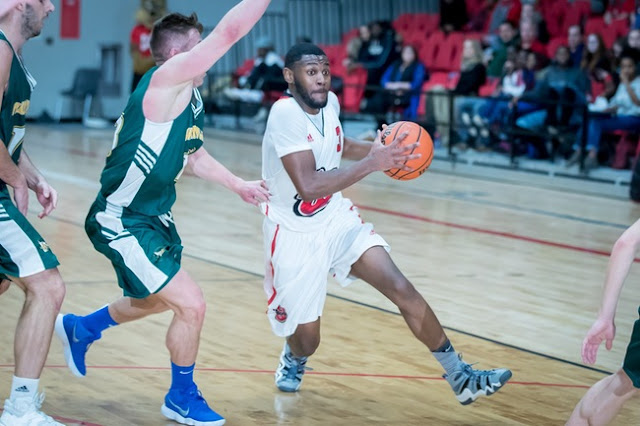 For the second time in two years, Narcisse Ambanza has been highlighted as one of the top performers in the Canada West conference.

It is the second conference honour for Ambanza, who was named to the Canada West all-rookie team after the 2016-17 season.

Ambanza, a 6-foot-2 guard out of Eastern Commerce, led the team in scoring at 15.7 points per game, averaged 6.2 rebounds per game and dished out 3.7 assists per game.

Ambanza has shown signs of establishing himself as one of the top point guards in the Canada West conference and statistically improved his numbers in points per game, rebounds per game and assists per game (13.1/3.5/2.7) from his freshman season.

In 2017-18, Ambanza scored at least 20 points in seven games and scored at least 30 points twice, including a career-high 36 at Brandon, Jan. 5, which was the fourth-highest scoring performance in the Canada West this season.

Ambanza scored in double figures in all but three contests this season and posted two double-doubles in conference play and three overall.

"It's great to see Narcisse honoured as an all-star in the conference," Wesmen head coach Mike Raimbault said. We asked a lot of him this season on both ends of the court having the ball in his hands, and often taking on key defensive match-ups. He is very deserving of the honour."

The Wesmen have had a player on all-conference teams in each of the past six seasons.