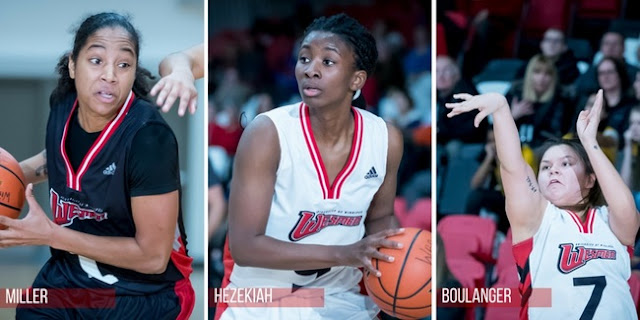 Three Winnipeg Wesmen were named to Canada West conference all-star teams for women's basketball, the conference announced Thursday morning.  Fifth-year point guard Antoinette Miller was once again named first-team all-conference, the second time in as many years she has garnered that honour.

Miller, who spent two seasons with the Wesmen, was once again named to the top team after leading the country in scoring with 25.9 points per game. Miller's 3.9 steals per game also led the nation, and her 39.7 per cent three-point efficiency was second in Canada West and seventh in U SPORTS.

Miller's 9.1 rebounds per game was sixth in Canada West and second among guards.

Hezekiah was named third-team all-star after leading the team in rebounding with 10.9 points per game, the first time since Winnipeg moved to the Canada West in 1999 that a U of W player has averaged double-digit rebounds for a conference season. The previous high was Heather Thompson's 9.8 in 2004-05.

The East St. Paul native's average put her third in Canada West and eighth in U SPORTS.

Hezekiah was also second on the Wesmen in scoring with a career-high 16.8 points per game, which was 11th in Canada West.

Boulanger's first year at the university level showed the Wesmen they have a guard for the future. Boulanger was third on the Wesmen in scoring at 9.7 points per game and gave U of W a bona fide perimeter threat. Boulanger finished fourth in Canada West three-point shooting at 38.2 per cent, the tops among first-year players in the conference and second among true freshmen in U SPORTS.

The Wesmen finished the conference season 14-6 and won a first-round playoff game against UNBC before falling in three games to Saskatchewan in the best-of-three Canada West quarter-final last week.

In 2018-19 they can potentially return all but two players from this year's roster, Miller and post Skylar Boulanger.