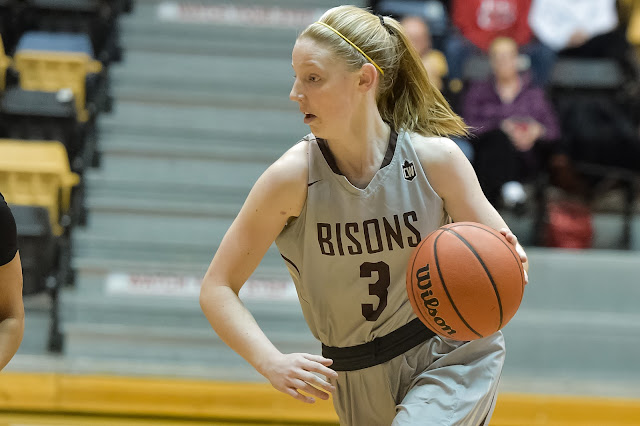 The 2017-18 Canada West women's basketball all-star and all-rookie teams were announced by the conference on Thursday, February 22. The University of Manitoba Bisons had one student-athlete honoured for her efforts.

Randall, 20, completed her second season with the Bisons and earned her first conference all-star selection at Manitoba at the guard position. Randall finished tied 11th in conference scoring and led the team with 16.8 points per game while playing and starting in 18 of 20 conference regular season games in 2017-18 season. In her sophomore season, the Dundas, ON native increase scoring by over four points per game from her first season (2016-17: 12.7 PPG). In addition, the 5'8" guard was 13th in CW with 30.3 minutes per game,11th in Canada West foul shooting at 81.9%, seventh with 2.4 CW steals per game and T-3rd with 3.6 conference assists per game.

Bison head coach Michel Sung stated, "We are very proud and excited for Taylor to be recognized by the conference! She put a lot of hard work into this past off season and really tried to approach each week of the season as a opportunity to get better. She added components to her game that allowed her to contribute more consistently night to night & made her a better team player. There is no doubt in my mind, Taylor will only build on this moving forward and continue to help our Bison team reach new standards."

Bison Notes: Prior to Randall All-Star selection, there has only four different Bison women's basketball players to earn CW All-Star honours since the Herd joined Canada West in 2000-01.