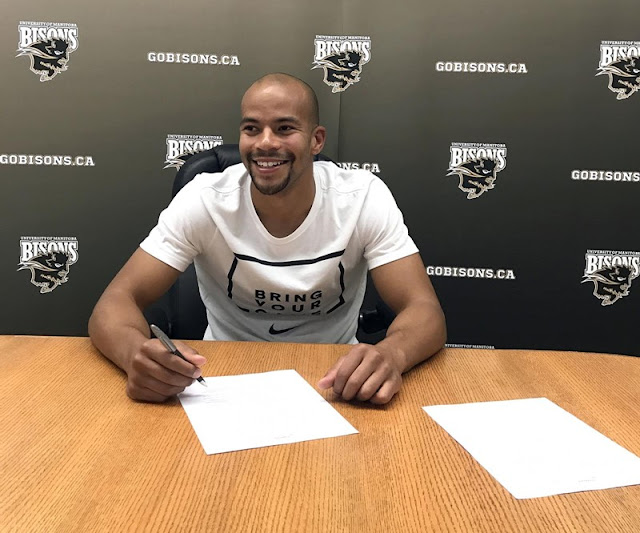 "I feel very honoured and thrilled to be starting my professional career in Norway playing for Bærum Basket," commented Omoerah. "Coach Mathias Eckhoff has given me a great opportunity and one I believe is a great fit. I owe a special thank you to my family, Kirby Schepp, my former teammates, the University of Manitoba and everyone who has helped me get to where I am today. For that I will be forever grateful. I am excited to become apart of the Bærum community and club."

Omoerah finished his fourth and final season at Manitoba in 2016-17. The Winnipeg native was tenth in conference with 31.3 minutes played per game and was fifth with 8.7 conference rebounds per game while starting in all 20 regular season games plus was named Wesmen Classic MVP for a second consecutive season. In 2015-16, Omoerah, a Grant Park HS grad, returned from a three year absence and was named Canada West Second Team All-Star after almost averaging a double-double (13.2 ppg, 9.8 reb/g) while starting all 20 games. The 6'4", 200 lbs. versatile guard was fifth on team in scoring with 9.3 ppg and second on Bisons with 6.0 reb/g in 2011-12 and during his rookie campaign in 2010-11, he was seventh on team in scoring with 6.1 ppg.

Bison men's basketball head coach Kirby Schepp, in his ninth season at the helm, said, "We are very proud to see another one of our guys get the opportunity to live out their dreams of playing professional ball. Keith has continued to improve and work in his time with us and it has really paid off. I know Keith's approach to game and tremendous abilities will lead to him having long career overseas. We very excited and proud to watch him take this next step in his career."

Bison Notes: Omoerah is the second Bison to sign a pro contract as he joins fellow Bison teammate guard AJ Basi who signed a professional contract to play for Newcastle Eagles of British Professional Basketball League for the 2017-18 season.