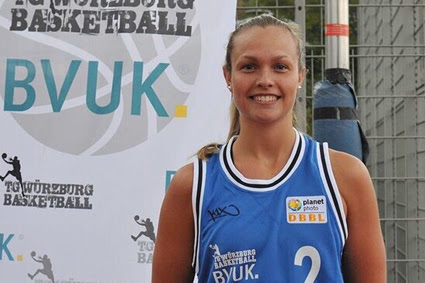 Former University of Winnipeg Wesmen Women’s Basketball great Stephanie Kleysen had a memorable first year playing professional basketball in Germany.  Kleysen in her first season with the BVUK Sharks Wurzburg, was named the Eurobasket.com All-German 2 Bundesliga South Player of the Year, Guard of the Year, Import Player of the Year and was named to the 1st All-Star Team. She played a huge role in leading the Sharks to a 13-7 regular season record. In regular season action she led the team in points (15.1 ppg), rebounds (9.5 ppg) and steals (3.4 rpg). Kleysen was also named the Player of the Week on two occasions.

She will be returning to Manitoba later this summer to join the coaching staff with the 17U Team Manitoba female basketball team as an assistant coach.  The team will be travelling to a number of warm up tournaments in July and be participating in the Canada Games in Winnipeg July 29 - August 4.