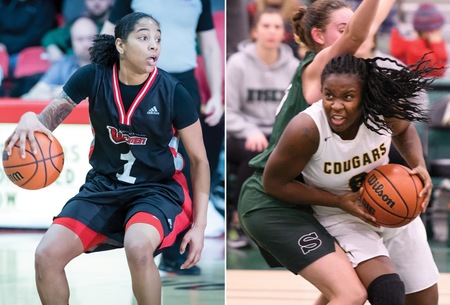 VICTORIA - Winnipeg's Antoinette Miller and Regina's Kyanna Giles (of Winnipeg) claimed national women's basketball awards Wednesday night in Victoria ahead of the U SPORTS Final 8, as Miller was named the U SPORTS Defensive Player of the Year, while Giles earned the Kathy Shields Award as the nation's top rookie.

Miller, who was also up for the Nan Copp Award as national player of the year, had an outstanding season for the Winnipeg Wesmen, who went 18-2 during the Canada West regular season, before finishing fourth during the conference playoffs.

The Phoenix, Arizona native was a threat at both ends of the floor, leading the conference in scoring with 18.7 PPG, while also finishing first in assists (76), third in steals (72), and sixth in defensive rebounds (118). She is the first Winnipeg player to claim a national award in women's basketball since JoAnne Wells was named national player of the year back in 2005.

Giles, who became the first Cougars rookie since 1996 to be named an all-star, averaged 12.9 points per game and was also the team's leading rebounder with 7.3 boards per contest. She was also one of the conference's best from three-point range, hitting 21 triples and shooting over 41% from downtown.

The last Regina rookie to be named a conference all-star was Andrea Gottselig, who was the only Cougar to be named the national rookie of the year prior to Giles.

Also announced Wednesday on the eve of this week's U SPORTS Final 8 tournament in Victoria were the U SPORTS All-Canadian and All-Rookie Teams.

Antoinette Miller of the University of Winnipeg Wesmen is the 2016-17 recipient of the U SPORTS Women's Basketball Defensive Player of the Year.

The 5-foot-6, fourth-year guard from Phoenix, Arizona finished among the league leaders in both offensive and defensive categories during the 2016-2017 Canada West regular season. Her relentless play at both ends of the court played a vital role in helping the Wesmen finish with an 18-2 regular season record and a first-place finish in the Canada West Women's Basketball conference standings. She finished regular season play with 72 steals (third in the country) and was instrumental in Winnipeg's suffocating defensive play that allowed 60.7 points per game, while holding the opponents to 37.6 per cent shooting from the field.  Miller was also a force on the offensive side of the ball, finishing the season fourth in the nation averaging 18.7 points per game and first in Canada West assists with 76.

"We are very proud at the University of Winnipeg that Antoinette was recognized as the U SPORTS Defensive Player of the Year," said Wesmen head coach Tanya McKay. "Antoinette is a tremendous competitor, rebounder and defender who is very deserving of this award. Antoinette plays the game with a tremendous amount of passion and heart and this has helped elevate the play of her teammates all year."

The other nominees were guard Danielle Boiago of McMaster, centres Alex Kiss-Rusk of McGill, and Katelyn Mangold of UNB.

Kyanna Giles earns U SPORTS Rookie of the Year recognition after turning in a sensational season for a University of Regina team that will head into this weekend's national championship as the No. 5 seed with a 32-4 overall record.

Giles finished second on the Cougars in scoring with an average of 12.9 points per game and also had a team-leading average of 7.3 rebounds per game while leading Regina in steals during the Canada West schedule. She eclipsed the 20-point barrier on three occasions in conference play, including a season-high 25 points in a win at Brandon.

Also named a Canada West third-team all-star this season, Giles joins Andrea Gottselig (1996) as the only players in U of R history to earn the Kathy Shields Award as the U SPORTS Rookie of the Year. Giles, who's enrolled in the Faculty of Arts, starred for Sisler High School in Winnipeg before coming to the University of Regina. She was named the top high school player in Manitoba by the Winnipeg Sun in 2014, 2015, and 2016.

"It's rare for a rookie to be able to start and be one of the leading scorers and leading rebounder for a team that's been top four in the country all year," Regina head coach Dave Taylor. "That shows what a special talent she is. We make her guard four different positions on the floor, and she's had a bigger impact than any rookie we've ever had in my 11 years here.

The other nominees were guards Jenna Mae Ellsworth of UPEI, Kayah Clarke of Windsor, and Caroline Task of Concordia.


U SPORTS All-Canadian and All-Rookie Teams