Redshirt junior forward Emily Potter of Winnipeg has been named to the Pac-12 All-Defensive team and honorable mention on the all-conference team, Commissioner Larry Scott announced Tuesday after a vote by the league's head coaches.


Her defensive efforts landed her on the Pac-12 All-Defensive team, after earning all-defensive honorable mention last season. Potter leads the Pac-12 in blocked shots with 86 swatted shots, good for eighth in the NCAA as she sits just 14 blocks shy of breaking the program's all-time block record. 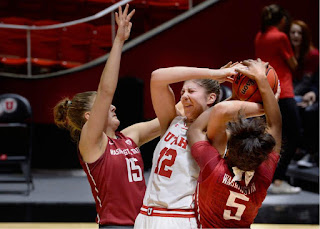 The starter has helped the Utes contain opponents to just 37-percent shooting from field-goal range and pilling down 42 rebounds per game.

Potter has led the team in scoring and rebounding throughout the regular-season averaging 13.9 points and 8.6 rebounds entering the Pac-12 Conference Tournament, earning honorable mention all-conference.  She ranks fifth in the Pac-12 in field-goal percentage as the 6-6 Winnipeg, Manitoba native is shooting 52.2 percent from the floor.

Potter became one of just 26 Utes to join the exclusive 1,000-point club 11 games into her junior season. Potter knocked down her 1,000th career point on a free-throw in the first quarter against Northern Arizona. She has tallied nine double-doubles and has scored in double figures in 23 out of the 29 games this season.

The 12th-seeded University of Utah women's basketball team will start Pac-12 Tournament play against the Arizona State Sun Devils in the first round on Thursday at 2 p.m. PT.

Action from Seattle's KeyArena will be televised live on Pac-12 Networks with Anne Marie Anderson (PBP) and Tammy Blackburn (Analyst) providing the commentary. Tyson Ewing will have the play-by-play call on ESPN 700.

The tournament will take place at KeyArena in Seattle this Thursday through Sunday, March 2 - 5. Tickets are still available at pac-12.com/tickets or the East Box Office at KeyArena.
ALL-PAC-12 (15 members)