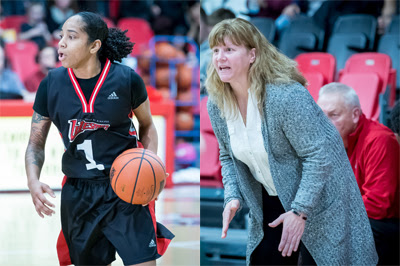 Fourth-year guard Antoinette Miller had one of the most dominant seasons in recent Canada West history, leading a resurgent Wesmen team that improved by 10 wins this season from a year ago (8-12 in 2015-16). Miller led the conference in scoring with 18.7 PPG, while also finishing first in assists (76), third in steals (72), and sixth in defensive rebounds (118).

“Our program is so proud of Antoinette for receiving the Outstanding Player Award from Canada West. To be at or near the top in almost every offensive statistical category proves Antoinette is an exceptional offensive player, who is also a very unique defensive talent. She is not only amazing on her own, she works very hard to make others around her better on both ends of the court. This award recognizes Antoinette as a special player, but what we see in Antoinette is a special person whose personality and energy is infectious, and who is much-loved by her teammates, and all that come in contact with her.

“Antoinette is one of the most explosive and tenacious defenders I have had the pleasure to coach in my 21 years at the University of Winnipeg. As a diminutive 5’6” guard, Antoinette has inflicted havoc on the league with her ability to disrupt the oppositions’ offence with her amazing anticipation skills, her quick hands, relentless pursuit defending the ball, along with her gift to come out of the pack with a defensive rebound”, said Wesmen head coach Tanya McKay.

A distinguished coach with over 400 career victories, Tanya McKay has been head coach of the University of Winnipeg Women's Basketball program for 21 seasons, winning national silver medals in 2002 and 2004.

An outstanding player for the Wesmen (1986-1991), she was named an All-Canadian three times. McKay finished her career as the fourth all-time women’s basketball scoring and is a member of the Manitoba Basketball Hall of Fame.

The veteran coach engineered a massive turnaround in Winnipeg this season by going 18-2 – a 10-win improvement from 2015-16.

McKay now moves forward as the Canada West nominee for the Peter Ennis Award as U SPORTS coach of the year.

“On behalf of the Wesmen and personally, I am so pleased that Tanya has been recognized for her team’s accomplishments. Tanya is a great teacher of the game, an outstanding recruiter, and more importantly she is a fantastic leader and role model. I couldn't be happier that her peers have chosen her as the 2016-17 Canada West Coach of the Year”, said Athletic Director Dave Crook.