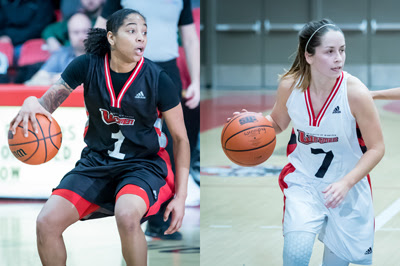 Miller was named to the First All-Star team after leading the conference in scoring averaging 18.7 points per game during regular season action. A starter in all 20 games, she finished first in total assists (76), 3rd in steals (72) and was 8th in rebounding with 7.8 rebounds per game. She recorded four double-doubles in regular season play and scored a season high 27 points vs the Regina Cougars on February 4th, 2017. She was named the Canada West Female 3rd Star of the Week for the period ending February 5, 2017.

“A huge congrats to Antoinette for being recognized as a Canada West All-Star. Her ability to be consistent each and every game and push and elevate the play of her teammates has been outstanding. Antoinette’s style of play to the push the ball in transition, her touch to finish at the rim amongst the trees, and her tenacious defensive presence has helped our team be amongst the top teams in the country” said Wesmen women’s basketball head coach Tanya McKay.

Noonan was named a Third Team All-Star after finishing the season averaging 14.0 points per game in the 18 regular season games played during the season. A deadly outside shooter, Noonan finished 5th in the conference with 44 three-pointers and was relentless on defense finishing with 45 steals (7th in Canada West). She scored a season high 26 points against the Victoria Vikes on February 10, 2017.

This year’s selection is Noonan’s second in her five year career. She was a third team all-star in 2014-2015.

“Megan has been our rock all season long.  An impactful leader on and off the floor with a strong basketball IQ. Megan has been very consistent in her play all season playing alongside Ant pushing and challenging our team to be better at both ends of the court.  We are very pleased Megan has been recognized for an outstanding season in her 5th year.  Her hard work and dedication to being the player she is has been rewarded”, added McKay.