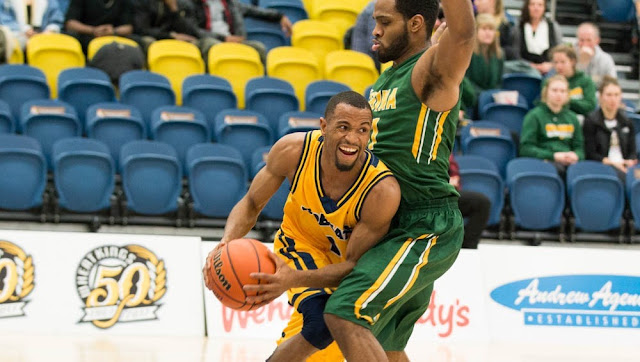 BRANDON – He's only played one season north of the border so far, but import guard Tyvon Cooper has made a mark and is now being recognized for his play.

The Middletown, N.Y. product has been named a Canada West third-team all-star for his contributions on the court this season.

Cooper finished fifth in the conference in scoring (18.4 ppg), fourth in free-throws made (98) and sixth in minutes played.

More important than the individual accolades, Cooper helped turn the Bobcats around from a 1-19 season one year ago to a 9-11 record in conference play this year.

"Tyvon adjusted very well to his new environment both on and off the court. His leadership, character, and work ethic allowed him to have a successful season individually, but more importantly he helped improve our program as a whole," says coach Gil Cheung.

"We are very proud of his accomplishment and look forward to him building on this season," Cheung adds.

Cooper and the Bobcats hosted a first round playoff series – the first time BU hosted a playoff basketball game in the Bobcats' new facility the Healthy Living Centre.

The 'Cats had their season cut short by the surging Thompson Rivers WolfPack in that playoff series, but not after BU battled back in game three from a 26 point deficit to just three points late in the game.

Cooper was recognized as the Canada West second star of the week back in late January before being named the BU Smitty's Sportsline Lounge Athlete of the Month for January.