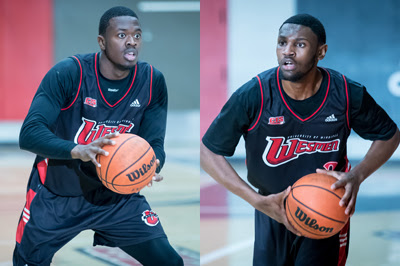 Lynch-Blair finished second in team scoring averaging 15.3 points per game this past season. The 6-4 guard from Toronto, Ontario was a starter in 18 regular season games, finishing the campaign with 4.9 rebounds and 3.5 assists per contest. He scored a season high 29 points in an 87-81 victory over the Brandon Bobcats (November 25, 2016).

Lynch-Blair was also named to the conference 3rd all-star team following the 2015-16 season.

“We are excited to have Denzel recognized as an all-star in our conference again this year.  He continues to show growth both on and off the court and we are proud of his efforts”, said Wesmen men’s basketball head coach Mike Raimbault.

Ambanza was nothing short of impressive in his rookie season, starting in 13 of the 20 regular season games he participated in during the 2016-17 season. The 6-2 guard from Eastern Commerce High School (Toronto, Ontario) averaged 13.1 points (third on the team) and grabbed 3.5 rebounds per game. He scored a season high 23 points on two occasions during the regular season, November 11 vs Saskatchewan and again on November 24 vs Brandon.

“Narcisse had an outstanding first season in our conference, not often looking like a freshman.  Narcisse is an exciting two way player who will continue to grow and be an outstanding player in this conference”, added Raimbault