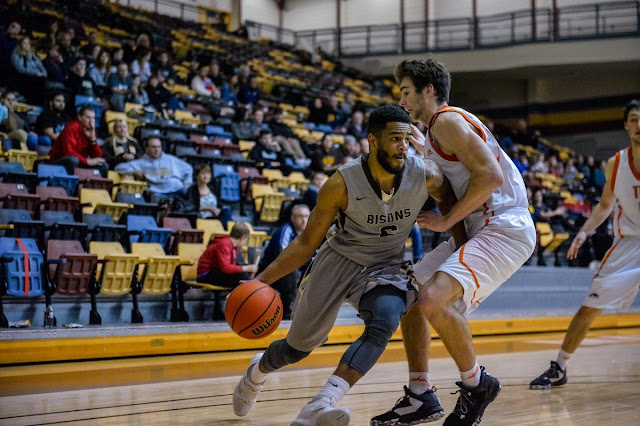 The 2016-17 Canada West men's basketball all-star and all-rookie teams were announced by the conference on Monday, February 27. The University of Manitoba Bisons had two student-athletes honoured for their efforts.

Alleyn, 21, played in his fourth season with the Bisons and earned his first conference all-star selection at Manitoba. Alleyn had his best season statistically as he was tied for ninth in conference scoring at 17.4 points per game. The Winnipeg native also was in tenth spot in conference 3-point percentage at 42.5 and tied for 16th in Canada West in minutes played per game at 30.6 while starting and playing in 19 of 20 conference games. He was also fourth on team with 3.6 rebounds per game, third at 2.1 assists per game and third with 1.3 steals per game, The 6'2", 200 lbs. guard was co-captain of Manitoba for the first time with the Bisons and led the team to the fifth seed in 2016-17 conference season with a 12-8 record.

Wagner, 18, had a breakout season in his first year with the Herd. The Winnipeg native was third in Canada West and led the team at 56.8% field goal percentage and was fifth in team scoring with 7.5 points per game while playing in all 20 conference games in 2016-17. In a veteran laden squad, Wagner averaged 17.9 minutes per game (sixth on team) and the 6'7", 200 lbs. forward grabbed 3.6 rebounds (fourth on team) and tied for second with 0.4 blocks per game.

Bison Notes: Manitoba will play in the Canada West Final 4 for the second consecutive season. The Bisons will play one of the two conference semi-final game against first seed and host Calgary on Friday, March 3 at 9 p.m. CT and can be seen live on canadawest.tv website. With a win, the Herd would advance to the nationals.