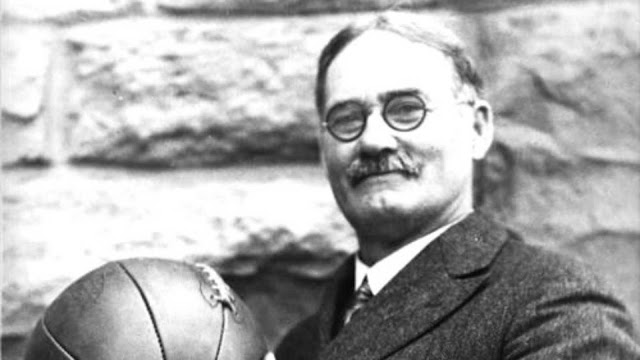 On this day in 1891, 125 years ago, Almonte, Ontario native James Naismith derived a new sport, "Basket Ball" at the Springfield, Massachusetts YMCA to fill the void between football and baseball seasons.

The concept of basketball was born from Naismith's school days in the area where he played a simple child's game known as duck-on-a-rock outside his one-room schoolhouse. The game involved attempting to knock a "duck" off the top of a large rock by tossing another rock at it.

In Springfield, Naismith was faced with the problem of finding a sport that was suitable for play inside during the Massachusetts winter for the students at the School for Christian Workers. Naismith wanted to create a game of skill for the students instead of one that relied solely on strength. He needed a game that could be played indoors in a relatively small space. The first game was played with a soccer ball and two peach baskets (hence the name 'basket') used as goals.

Naismith later described those first moments of play in mid December 1891: "There were eighteen in the class; I selected two captains and had them choose sides. When the teams were chosen, I placed the men on the floor. There were three forwards, three centers, and three backs on each team. I chose two of the center men to jump, then threw the ball between them. It was the start of the first basketball game and the finish of the trouble with that class."

James Naismith devised a set of thirteen rules of basketball:
In addition to the creation of the basketball, James Naismith graduated as a medical doctor, primarily interested in sports physiology and what we would today call sports science and as Presbyterian minister, with a keen interest in philosophy and clean living. Naismith watched his sport, basketball, introduced in many nations by the YMCA movement as early as 1893.


Basketball was introduced at the Berlin Olympics in 1936. Today basketball has grown to become one of the world's most popular sports.