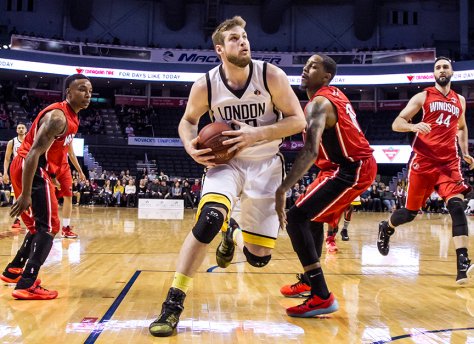 Slan Sports Management has announced that Chad Posthumus has signed a one-year contract with Kagoshima Rebnise in the B2 Division of the newly formed Japanese B League.

Posthumus, a 6’11” center, has just completed his 2nd professional season, in which he played for two teams in the National Basketball League of Canada (NBLC). He played 22 games for the London Lightning before he was traded to the Island Storm, where he completed the season. Over the entire season, Posthumus averaged 11.0 points per game, and ranked 9th in the NBLC in both rebounds and blocks with 6.9 rebounds, while adding 0.8 blocks per game. The Island Storm lost to eventual champions, the Halifax Hurricanes in the first round of the playoffs.

A Winnipeg, Manitoba native, Posthumus played high school basketball at River East Collegiate. He went on to start his collegiate career at the University of British Columbia where he played one season in Canadian Interuniversity Sport.  Posthumus then moved to Howard College in Texas for one year before transferring to Morehead State University in the NCAA for his final two seasons of eligibility.

In his senior year at Morehead State, Posthumus was the 4th leading rebounder in the NCAA, averaging 10.9 boards per game in just 25.7 minutes. He led the country in rebounds per 40 minutes with 17.1 as well as rebounding percentage at 25.2%. Posthumus also averaged 9.6 points per game and was named to the All-Ohio Valley Conference (OVC) 3rd Team, leading Morehead State to the OVC Tournament semifinals. After graduating, he was selected to participate in the Portsmouth Invitational Tournament as one of the top 64 seniors in the country, and was invited to pre-draft workouts with the Toronto Raptors and Chicago Bulls. Posthumus was eventually invited to the Chicago Bulls minicamp where he earned a spot on their Las Vegas Summer League roster.

Posthumus played for three teams in his rookie season in 2014-2015. He started the year with Levanga Hokkaido Sapporo in Japan, where he averaged 10.1 points and 8.1 rebounds over 16 games before moving to the Mississauga Power in the NBLC midway through the season. In three games with the Power, he boasted averages of 24.3 points and 15.3 rebounds per game. Posthumus then finished the season with Athletico Argentino Junin of the Argentinian Liga A. There he helped the team to a 4th place regular season finish in the South Division, averaging 9.7 points, 4.9 rebounds, and 0.8 blocks in just 17.9 minutes per game.

Posthumus is eager to return to Japan and take on a big role for Kagoshima.

“It is wonderful to be back in Japan playing basketball with the Kagoshima Rebnis,” said Posthumus. “I am looking forward to an excellent, win-filled season.”

For more information and individual box scores for Chad throughout the season, visit: http://slansportsmanagement.com/chad-posthumus .

About Slan Sports Management
Slan Sports Management (SSM) is a dynamic sports management firm dedicated to building and managing the careers of elite basketball players. SSM has negotiated contracts for its clients in over twenty countries around the world and continues to be a leader in the basketball representation business. To learn more, visit: http://slansportsmanagement.com .