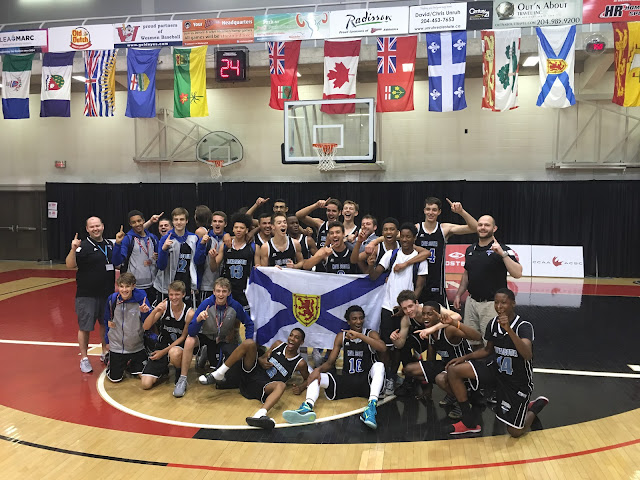 On behalf of Basketball Manitoba, we would like to thank all the amazing volunteers and sponsors who helped make this event happen! We would also like to congratulate all of the players, coaches, and fans on making this event a great success!

5th Place Game
Manitoba finished the tournament with a win over Alberta 83 to 69. Manitoba's top scorer was Kyler Filewich, who lead the team with a double double with 19 points, 16 rebounds. Alberta's top scorer was Brandon Munto with 23 and Imoudu Ibrahim with 13 rebounds.

Gold Medal Game
The battle for gold starts tipped off with a close game seeing Nova Scotia lead by 1 after the first period of play. Quebec and Nova Scotia continued to trade buckets seeing Quebec lead the first half 35-33. Heading into the fourth, Nova Scotia led 61-53 but Quebec didn't go down without a fight as both teams continued to exchange leads to the end. Malachi Joseph Alexander's 26 points helped Quebec tie the game at 75 late into the fourth. Kellen Tynes led the way with an impressive 21 points, 8 rebounds and 6 assists to help Nova Scotia close out the game. Nova Scotia wins gold 83-77.

7th Place Game
For 7th place, Alberta topped Newfoundland and Labrador 76 to 67. Adong Makuoi was tops in scoring for Alberta with 22 points and Alex Jap led in rebounding with 14 rebounds. Newfoundland and Labrador’s Emanuel Ring Lual had a double-double with 32 points and 10 rebounds. Devin O’Leary and Parker Combdon finishing with 10 rebounds a piece.

Gold Medal Game
The gold medal game was a back and forth battle between last year's champions Nova Scotia and top seed Ontario.  The score at the half was 48-38 in favour of Ontario. The game becomes a tale of two halves as Nova Scotia came out strong in the third quarter to cut the lead down to 2. With a strong performance from Ontario’s Emanuel Miller (31 points and 11 rebounds) and the lead was cut to 2 with 30 seconds left. Nova Scotia held off Ontario, backed by an impressive 22 points, 7 rebounds and 8 steals, performance by Chase Tynes as Nova Scotia wins the gold medal with a final score of 86-80.

Canada Basketball and Basketball Manitoba would like to acknowledge the following athletes on their great performances over the week to represent their province at the National Championships.

15U All-Stars and MVP

17U All-Stars and MVP