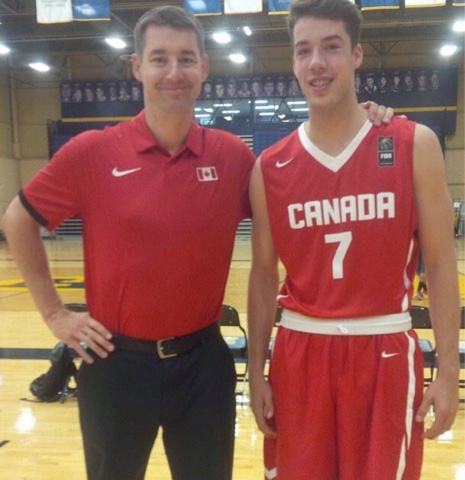 Basketball Manitoba is very pleased to announce that Manitoba's James Wagner has been selected to join the Canadian U18 National Team as part of the 12-man squad.  The team will compete at the U18 FIBA Americas in Valdivia, Chile and will look to qualify for the 2017 U19 World Championships.  He will join fellow Manitoban Kirby Schepp who is part of the national squad's coaching staff.


James was selected as the AAAA Boys Player of the Year in Manitoba back in April as part of the Basketball Manitoba Awards after a stand out year with the Provincial Champion John Taylor Pipers.  He will be suiting up for the Manitoba Bisons this fall with Coach Schepp and he attended the National Team Identification Camp back in early June.  James is now the 5th Manitoban athlete who is currently active in the Canadian National Team program.  He joins Emily Potter, Emmanuel Akot, Daniel Sackey and Niyah Becker.

“We’re pleased with the passion and commitment that this group of young men brought to camp and we look forward to representing Canada in Chile,” said Roy Rana, head coach.

The squad will complete training camp tomorrow at Humber College in Toronto and head to Valdivia to represent Canada at the 2016 U18 FIBA Americas from July 19th-July 23.

In 2015, the U19 team placed 5th at the U19 FIBA World Championships - the programs best-ever finish. Canada is currently ranked 3rd worldwide in the FIBA youth men rankings