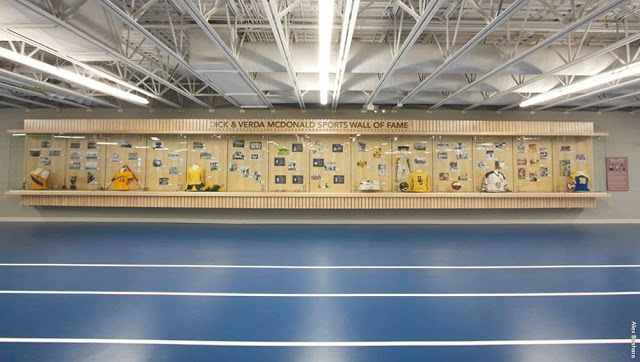 The Brandon University Athletics department has announced their their 2016 Wall of Fame inductees, which includes seven individuals, including three from basketball, and one basketball team.

The Dick and Verda McDonald Sports Wall of Fame is located on the second level of BU's Healthy Living Centre. The display features team pictures, artifacts, and uniforms from past teams and athletes of Brandon University and Brandon College.
Tickets for the Wall of Fame brunch on Saturday, October 15 at the Victoria Inn Imperial Ballroom can be purchased from the Customer Service Centre at the Healthy Living Centre for $50. 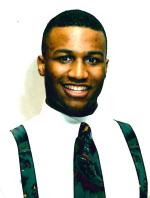 Keith Vassell burst onto the scene in 1991 and made an immediate impact with the men's basketball team as he was recognized as CIS/CIAU rookie of the year.
He garnered more great accolades during his fabulous five-year run with Brandon University. He was named an all-Canadian three times, a GPAC first-team all-star each year that he played and earned CIS player of the year honours in 1994-1995.
Vassell capped off his career by guiding the Bobcats to a national championship in 1996 where he was also honoured as the tournament's MVP.
Vassell also spent 11 seasons with the Canadian national men's basketball team from 1989-2000. During that run of representing his country, he played for Canada in Olympic qualifying matches, the 1999 Pan-Am Games, the FISU World University Games and the World Junior Basketball Championship.
The Scarborough, Ont. product also found success overseas in the professional ranks where he played 11 seasons. He won three championships and earned league MVP accolades while playing in Spain, Iceland, Sweden, Switzerland and Portugal.
Vassell returned to his alma mater after his playing career came to a close and coached Brandon from 2008-2010. Under Vassell's guidance, the Bobcats won the Great Plains Division in 2009.

Shawn Gray achieved greatness as a member of the men's basketball team from 1993-1998 after being recruited out of Toronto.
Gray guided the Bobcats to four Great Plains Athletic Conference championships over his five-year career and was a four-time conference all-star.
In 1996, Gray and his Bobcats captured the CIAU national championship. For his efforts, he was recognized as a tournament all-star.
He achieved elite status in his final season when he was honoured as a second-team all-Canadian in 1997-98.
After closing out his career at BU, he played professionally for three years in the Netherlands and Belgium and won two national championships.
Gray returned to his basketball roots and became head coach at his alma mater, Martin Grove Collegiate in Toronto. Under Gray's guidance, his boys' basketball team won six city titles and one provincial championship.
He also groomed many of his players for the next level with over 20 of them going on to play at colleges and universities in Canada and the U.S. 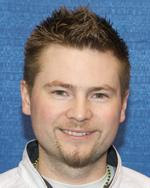 Mike McEwen is a household name when it comes to the roaring game and his curling track record includes sweeping success while representing Brandon University.
The former two-time Manitoba junior champion made a seamless transition to the university ranks and was recognized as BU's Male Athlete of the Year in 2002-2003.
McEwen led his BU rink to a CIS championship in 2002 and followed that by representing Canada at the World University Games in Italy the next year.
McEwen skipped the Canadian rink, which included current teammate Denni Neufeld, former BU student Sheldon Wettig, along with Brier and world champion Nolan Thiessen of Brandon.
The Canadians finished the round-robin with a record of 6-and-3 to advance to the playoffs. The McEwen foursome then beat Great Britain 6-4 in the semifinals and defeated Switzerland by the same score to claim the gold medal.
McEwen now curls out of Winnipeg where his winning ways have continued at an incredible rate. His resume includes six Grand Slam titles and a Manitoba provincial men's championship in 2016, which earned him a berth at the Brier.
His remarkable run serves as motivation for the new crop of Bobcat curlers with the sport returning to BU this year for the first time in more then a decade.

Kerri Hayhurst (nee Robertson) joins her dad Allan in this year's induction class after a solid three-year career with the Bobcat women's basketball team.
The Hamiota, Man. native transferred from the University of Winnipeg to Brandon University for the start of the 1991-92 season.
She made an immediate impact as she shared the team's MVP award with BU Wall of Famer Sandra Hamilton.
The following season she was named the Bobcats' sole MVP and took on a larger leadership role as team captain.
The personal accolades continued in her final season in 1993-94. She was named team MVP for a third straight year and earned Brandon University's Female Athlete of the Year award.
The Great Plains Athletic Conference also took notice and recognized her as a second-team all-star after she finished tied for tenth in the conference in scoring.
She was described as a cornerstone in helping lead the Bobcats in a new direction. Over the course of her career, she helped BU to their first win in league play in eight years, to their first playoff appearance in eight years and to their first top-10 ranking in eight years.
Hayhurst would become a teacher and spent 18 years at Neepawa Collegiate. During her time there, she coached the Tigers' high school girls' basketball team to back-to-back provincial AA championships in 1999 and 2000.

Community involvement and leadership is front and centre on the illustrious resume of Allan Robertson and the build-up began at Brandon College.
Robertson spent three years as a member of the football team and also played hockey at Brandon College from 1957-1962.
The Hamiota, Man. product served as captain and won the prestigious Jim Casey award for athleticism and sportsmanship in his final season with the College Caps hockey team.
He was also named to the Caps 1960's All-Decade Team for his efforts on the ice.
Robertson remained loyal to his small-town roots after his days at Brandon College. He was principal at Hamiota Collegiate for 33 years and spent 19 years on town council, which included nine years as mayor.
In 1997, Robertson joined elite company as he was inducted into the Manitoba Sports Hall of Fame. He is also a proud member of both the Manitoba Baseball Hall of Fame and Saskatchewan Baseball Hall of Fame.
He excelled both on and off the baseball field. Robertson represented Canada at the Pan Am Games as a player in 1967 and 1971. He also served as president of the Manitoba Baseball Association and the Manitoba Senior Baseball League.

Glennis Scott was a multi-sport star at Brandon College in the 1960's in hockey and football. His talents as a player were equally matched by his superb skills as a coach, manager and administrator following his days on campus.
Scott spent two seasons with the College Caps hockey team where he played alongside his older brother Gladwyn, who is a previous inductee into the BU Sports Wall of Fame.
Glennis had a team-leading 33 goals and 53 points during the 1961-62 season where the Caps finished in second-place in the Southwest Hockey League and played exhibition games against the Saskatchewan Huskies and Manitoba Bisons.
On the gridiron, Scott was also a standout and was selected to the All-Time Caps Football Team.
Scott's success also led to his induction into the Manitoba Sports Hall of Fame in 1986 and the Manitoba Baseball Hall of Fame in 1998.
He played 15 years in the Manitoba Senior Baseball League and represented Canada at numerous international events including the 1967 Pan American Games in Winnipeg.
Major League Baseball scouts saw the talent he had and the St. Louis Cardinals invited him to attend spring training, but Scott turned down the opportunity to focus his efforts on becoming an educator.
Scott would leave an indelible mark on the school system as a teacher, principal and superintendent over the course of 35 years.
Scott was associated with Baseball Manitoba for some 30 years and held various roles including president. His tenure with Baseball Canada also came full circle as he served as coach and president of the national program.

Alan Murdoch made a name for himself south of the border, but the road to greatness started from humble beginnings in western Manitoba and Brandon College.
Murdoch grew up on a farm near Neepawa, Man. and was an outstanding athlete in high school where he excelled in football, hockey and track.
He then made the jump to Brandon College where he was a multi-sport star in football and hockey from 1964-1965.
Murdoch later moved to the U.S. and in 1969 arrived at Iowa State to begin a legendary 43-year run as head coach and general manager of the men's hockey program.
In 2014, he retired as the winningest coach in U.S. college hockey history with 1,071 career victories and also stepped away as the longest tenured coach in college hockey history.
Among his many amazing accomplishments, was guiding Iowa State to the American Collegiate Hockey Association national championship in 1992.
Murdoch has also played a major role with USA Hockey. He has served as head coach, general manager and scouting coordinator for the Americans at multiple World University Games. 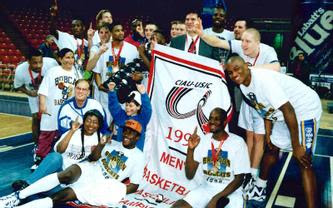 The 1996 Brandon Bobcat National Men's Basketball Championship Team will proudly celebrate the 20th anniversary of their amazing accomplishment by taking their rightful place in the BU Sports Wall of Fame.
Legendary coach Jerry Hemmings guided the Bobcats to a stellar 17-and-2 record in the Great Plains Athletic Conference as they rolled into the national tournament in Halifax with major momentum.
The Bobcats played with determination, poise and confidence as they beat the Acadia Axemen and the Toronto Varsity Blues to secure their spot in the national final against the reigning champions the Alberta Golden Bears.
It was a championship game of great plays as the Bobcats beat the Bears 79-72 to claim their fourth national title in 10 seasons.
Shawn Gray made a great block on break-away layup by Alberta's Greg Devries, Euan Roberts hit a baseline runner with the shot clock expiring and Demetrius Floyd had a put-back dunk with less than two minutes to play that was dubbed the 'TSN Turning Point' during the nationally televised contest.
Balanced scoring was also big for the Bobcats with six players reaching double figures including Brandon's own Jason Scott scoring a team-high 16 points.
Team captain Keith Vassell was named tournament MVP and clutched the championship trophy in his arms during an emotional TSN interview knowing it was his final game in a Bobcats' jersey.
Fellow 2016 Wall of Famer Shawn Gray also got the nod as a tournament all-star for the '96 Bobcats, who were inducted into the Manitoba Basketball Hall of Fame in 2009.
Source: http://ift.tt/1sTDETf