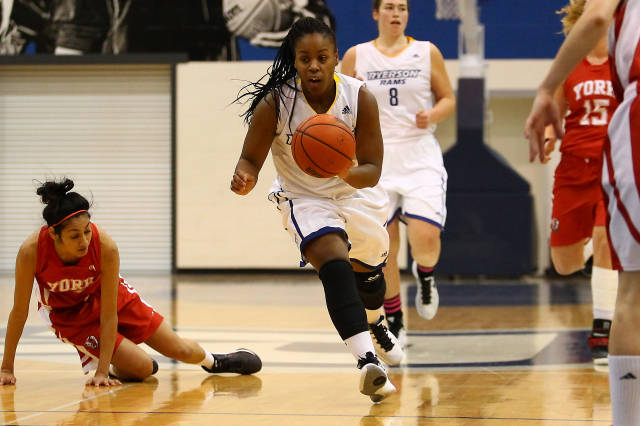 The Ontario University Athletics (OUA) has announced the 2015-16 women's basketball major awards and all-stars.  In her fifth and final season, Ryerson Rams guard Keneca Pingue-Giles (Winnipeg, MB) had a season to remember and becomes the first player in program history to be named OUA Player of Year.

Pingue-Giles, who is currently pursuing her Masters of public policy & admin, finished the season averaging 17.6 points per game, to go along with 77 assists and 130 rebounds as she led the Rams to a 16-3 record and a first place finish in the OUA East division.

The Winnipeg, Manitoba native was also named OUA Defensive Player of Year after leading the conference with 79 steals.  Pingue-Giles was a force on the glass for the Rams as she finished third on the team with 4.6 defensive rebounds per game.  She becomes the first Rams player to win Defensive Player of the Year since former Ryerson standout Lacey O'Sullivan won award in 2009-10.

Pingue-Giles has also been named an OUA all-star for the third-time in her career.  This is the second consecutive season she has been selected to the first-team after being named an OUA East Division second-team all-star in 2013-14.