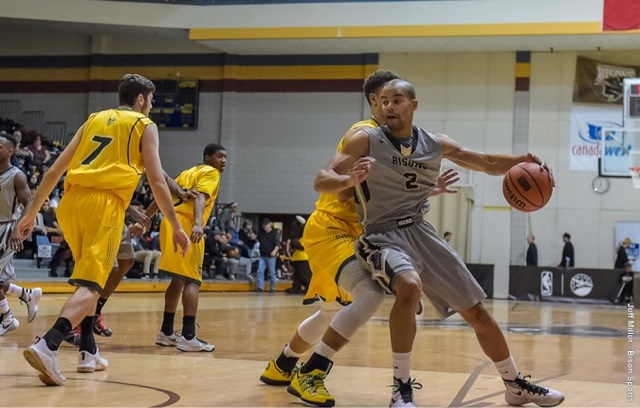 The Winnipeg native almost finished the season averaging a double-double with 13.2 points per game and 9.8 rebounds per game in his third season at Manitoba.

The 2015-16 Canada West men's basketball all-star and all-rookie teams were announced by the conference on Monday, March 7. The University of Manitoba Bisons had one student-athlete honoured for his efforts.

Bison men's basketball guard/forward Keith Omoerah (pronounced: Oh-mair-ah) has been selected as 2015-16 Canada West Second Team All-Star. This is the first time a Bison has been named a conference All-Star since the 2012-13 season (Stephan Walton) plus only second time since the 2007-08 (Isaac Ansah was Second Team).

Omoerah, 24, played in his third season with the Bisons and had an outstanding season in Canada West. Omoerah's season is all the more remarkable as he returned to Manitoba after a three-year absence and last played at the U of Manitoba campus in the 2011-12 season. The Winnipeg native was one of many factors in the Bisons finishing with a 15-5 conference regular season record and hosting conference playoffs for the first time since the 2003-04 season. He almost finished the season averaging a double-double with 13.2 points per game (32nd in the Canada West) and 9.8 rebounds (fourth in conference) while starting and playing in all 20 conference regular season games.

The 6'5", 205 lbs. guard/forward showed his versatility as he also added 3.8 assists per game, good for a tie for fourth in Canada West and 2.1 steals per game, tied for fifth in the conference. In addition, Omoerah was fourth in conference minutes played at 34.1, was 18th in field goal shooting percentage at 49.1% plus his offensive rebounds per game at 2.4 was tied for seventh in Canada West while defensive rebounds per game total of 7.4 was first in the conference.