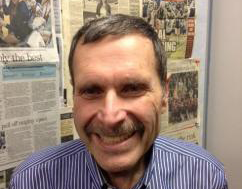 The Manitoba High Schools Athletic Association has announced the retirement of Executive Director, Morris Glimcher, effective June 30, 2016, after 40 years of dedicated service. Morris has served the MHSAA with distinction and is known across Canada as one of the most innovative and dedicated Executive Directors in the country. We are indebted to his vision and commitment to developing an association that is considered to be one of leaders in high school sport in Canada.

Mo, as he is affectionately called, has been with the MHSAA since 1975 and has devoted his life work to high school sports, not only in Manitoba, but across North America. Morris has been involved in all levels of high school sports beginning in the early 1970’s as the student manager for Bill Wedlake’s St. John’s High School Tigers. He managed the Junior Bisons basketball team at the University of Manitoba, before taking on a job in an organization that would later become part of Sport Manitoba. In 1975, Morris was hired as the Executive Director of the Manitoba High Schools Athletic Association and has worked tirelessly on behalf of student-athletes to build a strong organization that not only oversees the running of fifty provincial championships in eleven sports, but promotes the value of sports to the over 30,000 student athletes and 3,000 coaches across Manitoba.

Mo has been recognized by many organizations for his accomplishments including being inducted into the Manitoba Sports Hall of Fame as a builder in 2013, being the only Canadian to be recognized by the National Federation of State High School Associations with a Citation in 2003, and being presented with the Good Guy Award twice from the Manitoba Sportswriters and Sportscasters Association in 1988 and 2013.

A search committee has been established and will begin the challenging task of hiring a new Executive Director for the MHSAA. There will also be more information coming out in the future regarding a retirement celebration that will be held for Morris.

On Behalf of the MHSAA Board of Directors, please join me in wishing him the best in the next stage of his life and career.

Basketball Manitoba would like to echo these sentiments on behalf of the entire basketball community for all the dedication Morris has given to the sport of basketball!  He is truly a champion of the game and we wish him well in his retirement!