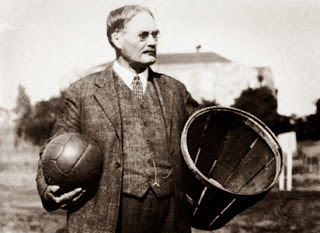 LISTEN: The University of Kansas has released a very rare audio clip of Dr. James Naismith speaking on how the sport of basketball came to be.  This excerpt from a January 31, 1939, broadcast of the radio program "We the People" hosted in New York by Gabriel Heatter is believed to be the only known audio recording of Naismith. In the roughly three-minute clip, Naismith, who had traveled to New York for a basketball doubleheader at Madison Square Garden, discusses setting up the first basketball game with two peach baskets in a gymnasium at the International YMCA Training School (now Springfield College) in Springfield, Massachusetts in December 1891.

This recording was discovered by Dr. Michael J. Zogry, Associate Professor, Religious Studies, and Director, Indigenous Studies, University of Kansas, in the audio and manuscript archives of radio station WOR-AM that were donated to the Library of Congress by RKO General, Inc. Dr. Zogry obtained permission for the University to include the recording in its archives and to use it for educational purposes.