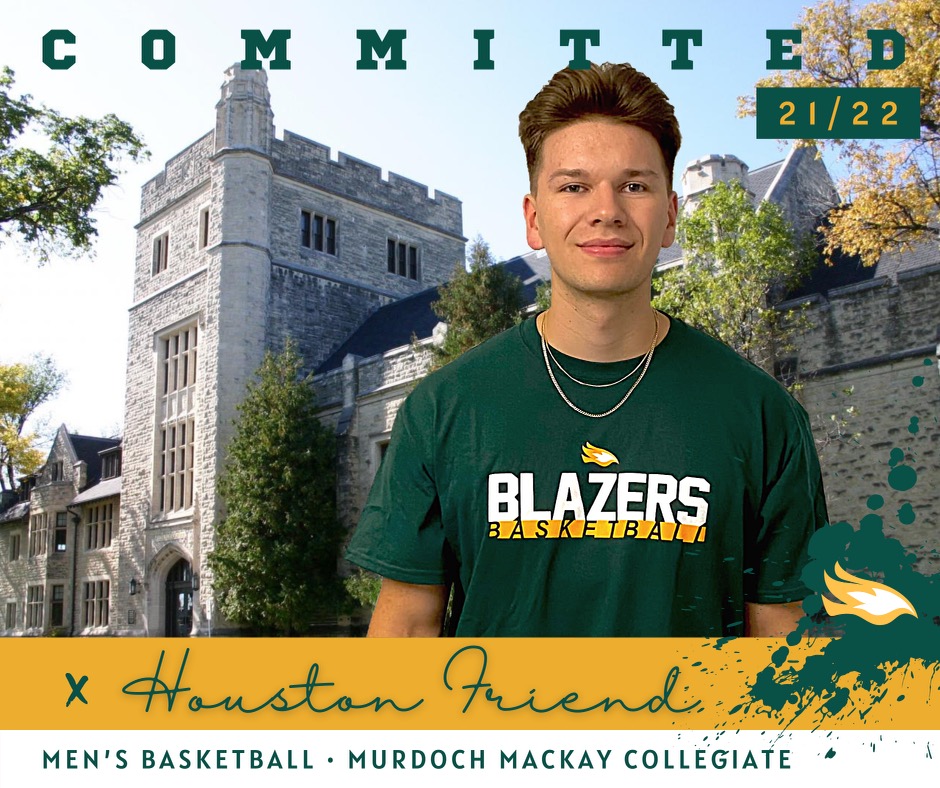 The CMU Men's Basketball has announced the commitment of Murdoch MacKay's Houston Friend for the 2021-22 NIAC and MCAC seasons.  The versatile 6'2 guard and wing comes to CMU with a maturity and hard-working attitude that will serve him well on the team helmed by head coach Scott Martin.

The 2019 high school graduate has spent the last two years at Asper School of Business at the University of Manitoba getting a start on his post-secondary studies.  A KPAC All Star while at Murdoch Mackay, Friend also comes with top club experience, having played for The Academy under Mike Page.  Despite all the travelling and tournaments in the United States, Friend found the most meanigful experience came from participating in the "Balling for a Cure" tournament in support of CancerCare Manitoba, started by Donovan Gayle as a way to give back to the community in thanks for their support during his battle with cancer.

Looking to extend his career into the college level, Houston sought out Blazers head coach Scott Martin about transferring and playing at CMU.  When asked what kind of player we can expect in Friend, coach Martin responded that "Houston is tough, physical, and hard-working. He reached out to me looking for an opportunity, and impressed at workouts." Friend looks forward to developing his skills on the court and the classroom with the Blazers, and is eager to compete and work together with a talented roster led by coach Martin. Now that team workouts have resumed in accordance with provincial guidelines, Friend has been able to join his teammates as they prepare for the upcoming season.

The Blazers will look to compete on both sides of the border this year, with both the NIAC and MCAC schedules released last week. The biggest news on the home front is the readmission of the University of St Boniface Rouges to the league, who fill a void left by Red River College, whose athletics programs remain on hold for the 2021-22 season.  This season's NIAC schedule begins with a road-heavy fall semester, including a season-opening trip to Cass Lake, Minnesota for games against the Leech Lake Tribal College Lakers on October 29th and 30th.  The fall reading break will see the Blazers head down to the suburbs of Minneapolis for dates with the Free Lutheran Bible College Conquerors, and the final trip of the semester will take the basketball squads to face the Sisseton Wahpeton Mustangs in Sisseton, South Dakota.

The Blazers Men's Basketball team's home opener is scheduled for November 5th, which sees the Providence Pilots come to town for the first MCAC tipoff of the season.  The full men's basketball schedule can be found on our website.