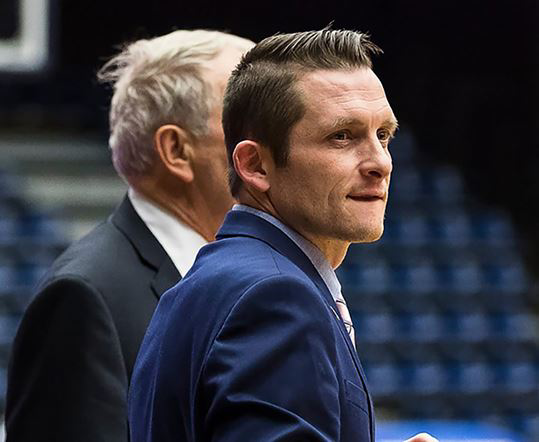 The Brandon University Bobcats women's basketball team has a new bench boss with the announcement of James Bambury as the program's next head coach.

Bambury brings both U SPORTS head coaching experience and a lifetime of commitment to the game of basketball.

A self-described military brat who lived in 13 communities over 26 years while growing up, Bambury has most recently called Wolfe Island in Ontario home. The changes in scenery during his formative years was in contrast to basketball, the constant that was always his favourite pastime and passion.

"I absolutely love basketball. I have such energy and enthusiasm for the game that's given me so much. For people to understand why I do what I do, it's because of the game of basketball and what it gives. The opportunity to give back, the coaches and mentors and volunteers who came before me, the sport that gave me so much, I feel that I still have to give back," says Bambury.

"Being a part of a team sport and coming together to do something special. That's my motivation. There's an opportunity to continue doing that while competing against some of the best teams in the country and for that I am grateful and excited," says Bambury.

Bambury takes over the coaching duties and officially joins Brandon University's Faculty of Education, just as the program's other U SPORTS coaches who all teach in the Department of Physical Education Studies.

Bambury's most recent coaching experience was as the Interim Head Coach at Queens University in the 2019-20 season where he led the Gaels to a 16-8 season and reached a No. 3 national ranking.

Prior to that season, Bambury spent seven years as an assistant coach for the Gaels with the primary responsibility of recruitment, student academic success and development of team culture. In his time with the program, the Gaels earned OUA silver medals twice (2012, 2016) and qualified for nationals in those same seasons.

He holds a Masters of Elementary Education and Education Policy degree from Carlow University and a B.A. from Queens, where he also played three seasons for the Gaels men's basketball team from 2000-03.

"James has a great mix of experience, having coached women's basketball that includes a stint in Europe and both as a head coach and full-time assistant coach in U SPORTS. He brings a reputation as being an excellent teacher of skills and has had a lot of success leading recruitment efforts at Queens," says Russ Paddock, BU's Director of Athletics and Recreation.

"James has a passion for basketball and coaching and has been a valuable resource to the Kingston basketball community for the past decade, and we are excited to see him bring those same qualities to Brandon."

Now the married father of two children sees the opportunity to take over and lead the Bobcats and move to a new city and community as an exciting new challenge.

"My greatest joy and greatest goal will be for people to come up to me and tell me they're fans. Getting to be part of the journey is going to be exciting."

The first steps in the process will be re-locating to Brandon and getting to know the team and community. Having watched plenty of U SPORTS basketball, including Canada West and Bobcat games over the years, he admits while he's familiar with the on-court product he'll need to learn about the personalities on the team, the department and the community.

"Having had the opportunity to work at other schools, the most joy and success comes from being part of the community. Even watching the Bobcat school day games, the attendance numbers and the support for the program, it shows that the community is behind the Bobcats program and that's a special thing."

"Being a part of the community is one of the main things any university program should try to do. I try to remind university students all the time that can give them such an opportunity to make giant strides. What Novell has done with the Junior Bobcats has been awesome and I really hope to continue growing what's been established."

Bambury plans to arrive in the Wheat City mid-summer and will begin his coaching duties soon by reaching out to current and prospective players and formulating plans and strategies for the upcoming season.

The Bobcats' 2021-22 Canada West conference schedule is set to be released this Friday.