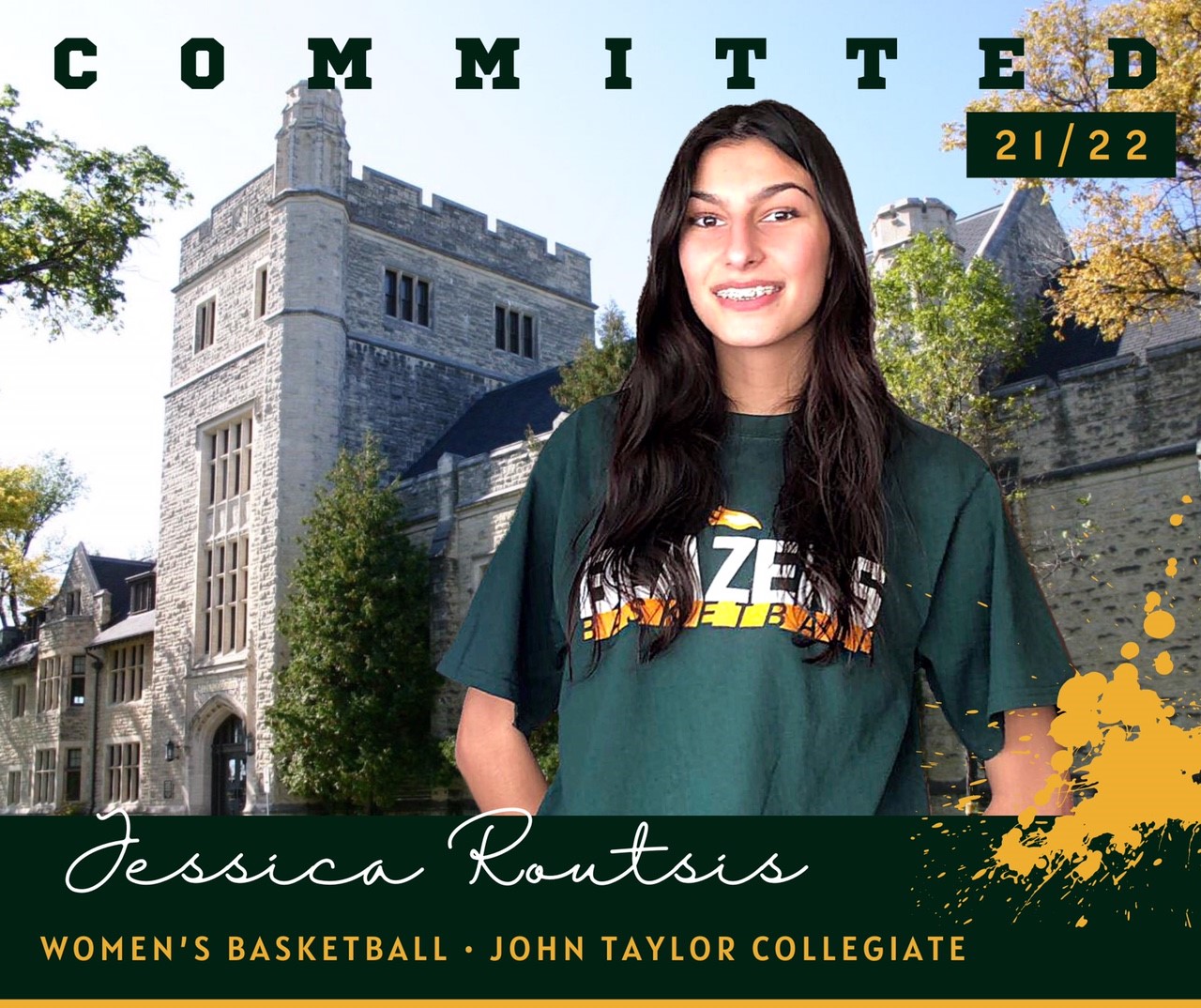 CMU Women's Basketball has announced the commitment of John Taylor Collegiate's Jessica Routsis for the 2021-22 NIAC and MCAC seasons.  The versatile 5'8 guard comes to CMU brimming with passion for the game made evident by her impact role as an underage player on her high school Pipers teams.

Despite not being able to compete in her graduating season, Routsis comes to the Blazers with leadership potential, having captained her high school varsity squad in her grade 11 year, when she earned MVP and Player of the Game honours in her team's playoff run to the WWAC Conference finals at the 'AAA' level.  Not surprisingly, she was also named to the league all star team after her John Taylor Pipers' fantastic showing at the championships.

Routsis' development in the sport started early, as she also captained her school's junior varsity team in grade 9, when she also earned MVP and Player of the Game awards for her play as a freshman.  A call-up to help the varsity squad at a city tournament in her grade 9 season led her to join the varsity team full time in her grade 10 year, when she found herself in the starting five most games, playing against other student-athletes two years her senior.

"Jessica is a very welcome addition to the Blazers" notes CMU Women's Basketball Head Coach Joe DiCurzio, who is entering his ninth season at the helm of the Blazers. "Jessica was one of the top athletes in this year's graduating class.  She has the size, quickness, and toughness to match up with anyone defensively.  Offensively she really attacks the basket well and with her ability to hit the pull up jumper consistently she will be very difficult to defend.  With her team first mentality she really fits in well wit hthe Blazers culture."

As a club player, Routsis laced up for the Manitoba Jr Bisons, who played to a third place showing at the Peg City Showcase in her last club season before the lockdown. Jessica also brings athleticism and experience from a multisport background, having excelled in premiere Winnipeg youth soccer playing for St Charles Force before youth sports came to a halt last summer, as well as volleyball at her Westwood area high school. Having lost her last collegiate and club seasons to the pandemic, Routsis is excited to join the CMU Blazers and start life as a university student-athlete when training can resume.

The most recent lockdown has halted spring training for members of the CMU women's basketball team, but the squad hopes to resume practicing later this spring or summer according to Return-to-Play protocols as outlined by Basketball Manitoba and approved by Manitoba Public Health. The Blazers are preparing to get back on the court for competitions in 2021-22, playing in an increased 16-game NIAC conference regular season and will be welcoming a new Manitoba program at Université de St-Boniface to the MCAC in 2021.