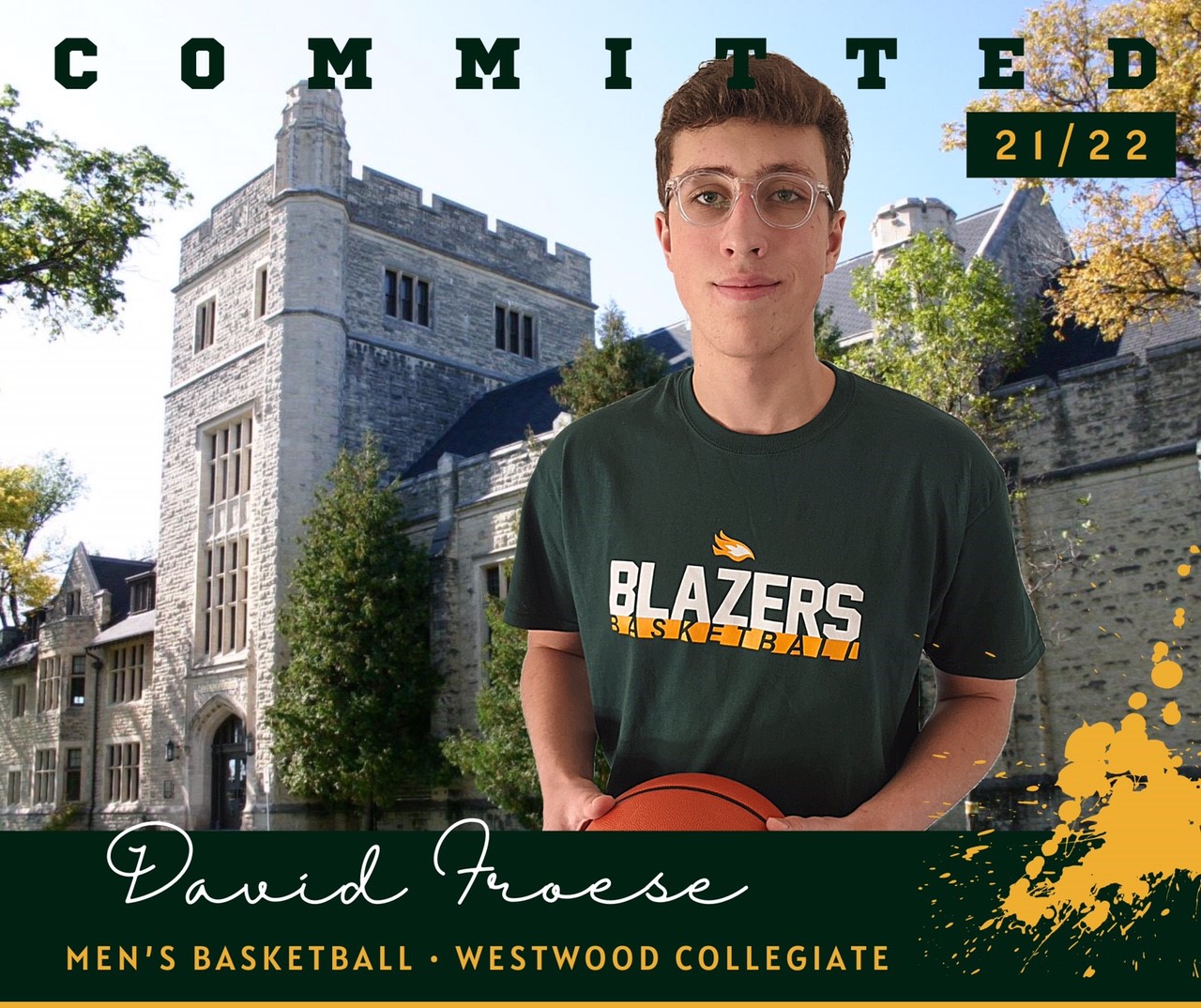 When he steps on the court for CMU next season, David Froese will officially become the tallest player to ever suit up for the Blazers. Standing a true six-foot-eight-inches tall, the Westwood Collegiate star recently signed his letter of intent to commit to CMU for the 2021-22 NIAC and MCAC basketball seasons.

"David is a big man with lots of potential," said CMU head coach Scott Martin, who with the likes of Froese and a 2020 rookie-class that included Matt Brenton (6'5), Ezra Leano (6'4) and Jesse Fedak (6'4), has made big steps in addressing the Blazer's reputation as a rather undersized NIAC program. "He is a little raw and is still learning the game but David has so much potential! He has been well-coached, he's very dedicated and he moves really well for a player of his size. I'm really happy to have him committed."

Froese grew over thirteen inches between Grade 6 and Grade 12, prompting the soon-to-be Westwood grad to turn his focus away from competitive swimming and biathlon and more towards his abilities on the basketball court.

A force in the paint for his high school, Froese helped the Warriors to 2019 tournament wins in Portage la Prairie (PCI), at St. James Collegiate and at the Westwood Collegiate home Invitational all at the 'AAAA' JV level. The following season, as Froese entered Grade 11 and varsity basketball, Westwood again won the St. James Invitational along with the Calvin Christian Classic and ended the 2020 season as the Winnipeg Tier-2 Champions prior to the pandemic shutdown.

On the club court, Froese credits much of his development to Club Mayhem and head coach Alex Barra. Barra guided Froese to start weight training at his high school and working with an Athletic Therapist through Acceleration Performance.

"As an individual, David has taken his 'athletic-excellence' mindset to the next level," says Barra. "He's set independent goals for his further development, spending every available lunch-hour and his evenings developing his basketball skills or working on his strength, speed, and agility,"

As a member of Team Mayhem since 2017, Froese helped his club program to a 17U Boys Tier-2 Peg City Championships in 2019.

"I am looking forward to getting to know a new team of players, who bring top level experience and commitment from around Manitoba and across Canada," said Froese. "I have been fortunate to work with several fantastic coaches in Winnipeg who have all contributed to my development. I am excited to play for Coach Martin, an experienced coach and former university player, to help take my basketball play to the next level. I want to use my height and size towards playing defence and scoring points for my team so I can contribute to a championship for CMU."

The Blazers are anticipating a return to the hardcourt for league play this October. Though the conference championship was officially cancelled in 2021, FLBC, Sisseton-Wahpeton, Trinity Bible, Oak Hills Christian and Nueta Hidatsa Sahnish College all competed in some form of a 2020-21 season in the cross-border league. The other five programs, including Manitoba's Red River College, Providence University College and CMU, all paused play in response to the public health orders.