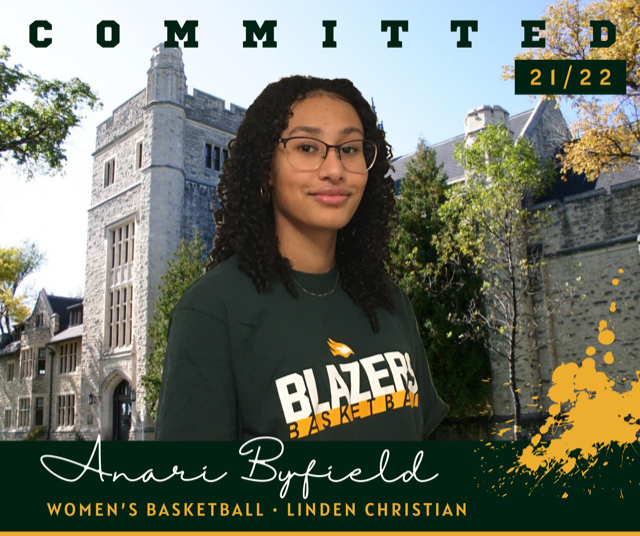 "We are absolutely thrilled to have Anari join us," said Di Curzio. "She is an amazing student-athlete who is a high-achiever on the court, in the community and in the classroom. With her length, jumping ability and timing she will be a superb and tenacious defensive player. Offensively, with her many skills, she will be a player that will be extremely difficult to stop. She has the drive, determination, willingness to learn and being a student of the game, she will fit in perfectly with our team's culture."

Byfield was instrumental for the Wings during her high school career, helping her team capture Zone 12 banners in 2018 and 2019, wins that lifted Linden Christian to berths in the 'AAA' provincials in consecutive seasons. The Wings also punched above their weight class by finishing 5th amongst 'AAAA' competition in the Bison Classic.

"Anari is one of those players that when you ask the team to do something, she is the one on the court to facilitate that action," said Byfield's high school coach, Laurie Curry. "She does so with leadership, teamwork and passion."

Added to her resume with Linden Christian, Byfield was selected as a Hoops For Hope Allstar in 2019, was recognized for her service with the Christian Character Award as a Grade 9 student and has represented the Wings on the track and on the badminton court.

"Anari is a real multisport athlete that uses all those skills that she has learned from other sports to make her a more complete basketball player," said Di Curzio.

On top of her club basketball commitments with the Junior Bisons, Byfield trained with the Winnipeg Optimist (WOA) track and field club in sprints, hurdles and high jump in 2018/19. That same year, she trained with Badminton Manitoba in the Identification Player program and has competed in numerous club tennis tournaments throughout her years of sport development.

Added to her many interests and experiences, Byfield helped in the development and coaching of two basketball programs, has assisted in coaching tennis lessons and camps and even successfully managed a musical theatre production of "Cinderella" that won Excellence in Production by Rainbow Stage.

CMU competes in the Manitoba Colleges Athletic Conference as well as the Northern Intercollegiate Athletic Conference in the US. News out of Manitoba in January was the announcement of new varsity basketball programs at the University of St-Boniface, with tip-offs of the upstart men's and women's programs scheduled for the 2021-22 season.