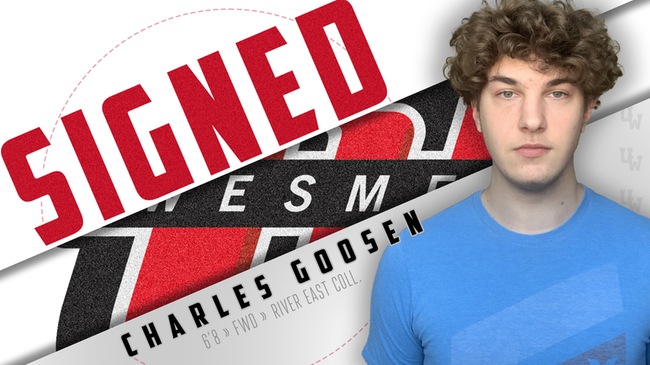 Given Charles Goosen's connections to the Winnipeg Wesmen, it probably should come as no surprise where he has committed to play basketball after high school.  Goosen, a 6-foot-8 forward out of River East Collegiate, has committed to head coach Mike Raimbault and the UWinnipeg men's basketball team as the second member of the 2021 recruiting class.

He joins Oak Park High School's James Rae as the first recruits in line for next season.

Goosen will join the Wesmen after having suited up for the Kodiaks teams coached by former Wesmen player and assistant coach Tyler Kohut.

"I got on the radar with U of W because Mike came to one of our practices … and I guess that's how my relationship (with U of W) really started was through that Evolve program because it was there because of COVID and all our stuff being cancelled," Goosen said.

"I thought it was the best option. It's a really good school academically and it's Winnipeg, it's U of W. This is my hometown. I feel like this is where I belong."

With Goosen's senior season of high school wiped out by the pandemic, he's had to find other ways to stay involved with the game and still feel like he's improving without training. To that end, he said he's utilized film prep by watching Wesmen clips to at least hone the mental aspect of the game.

"I've been trying to watch Wesmen basketball and we've been talking about that and my role as a player and what type of stuff I'd be expected to do," he said.

In Goosen, Raimbault thinks he's getting a player who can play both inside and out.

"Charles has a good combination of size and athleticism for his position as well as the ability to stretch the floor with range," Raimbault said. "Combined with his strong character and work ethic, he is a great addition to our program."

"'Goose' is strong with very good hands and isn't afraid to close out hard and defend on the perimeter," Kohut said. "With his size and natural touch, he has the potential to be a threat both inside the paint and outside the arc at the university level."

Goosen would add that he doesn't mind taking on the grind work, either.

"I put crazy amounts of emotion into basketball. I can see myself as definitely being that guy that'll show what he's feeling on the court. And I can be the big guy that can hold the defence and do the dirty work. … I'm that type of person: always making noise."