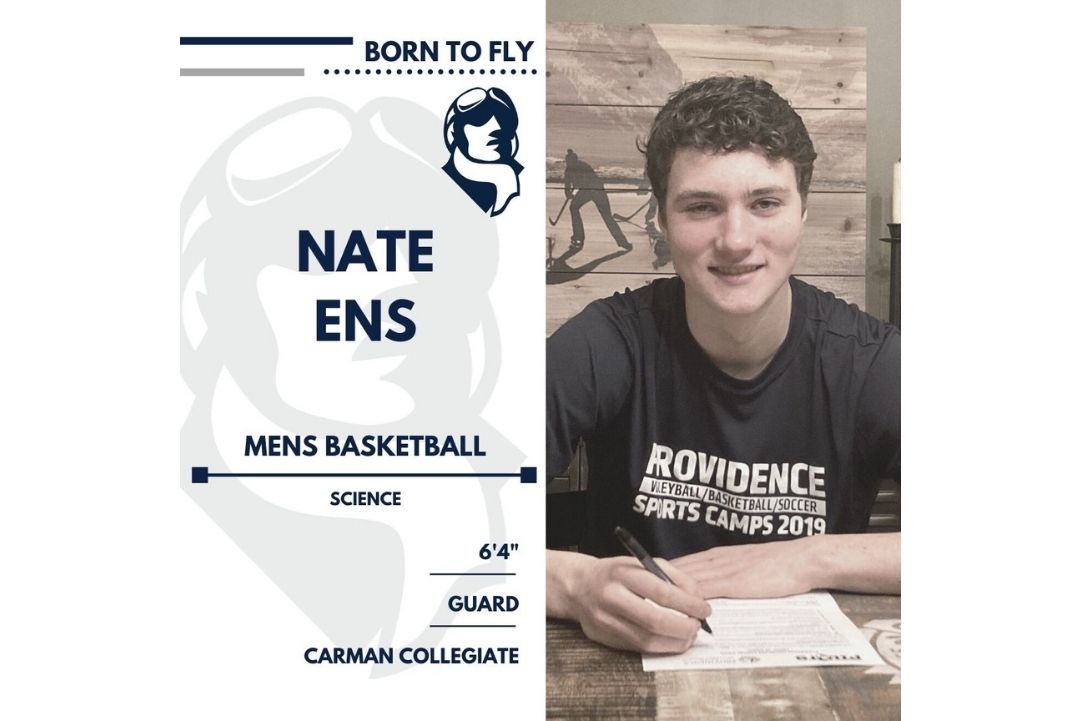 The Province Pilots Men's Basketball team has announced another Carman Collegiate Cougars recruit has signed his letter of intent to play basketball at Providence University College next fall. The 6'4" guard joins teammate Anthony Bueckert on the men's basketball team to bring further size and depth to the already strong Pilot squad.

Coach Pierre Dubreuil commented on his newest recruit by saying, "Nate is the second player from Carman Collegiate this year joining our 2021-2022 roster. I’ve followed Nate for a couple of years now and had the chance to coach him during our last basketball summer camp. He brings size and competitiveness at the guard position as well as a great positive attitude. With Nate and Anthony, our recruiting class is going exactly in the direction we wanted."

As an MHSAA basketball and hockey player, Ens brings a well-rounded athleticism and skill to the Pilots team. In only his grade 11 year, he was named to the All-Manitoba 2nd team for varsity basketball.

Larisa Ens, Cougars basketball head coach, speaks highly of his leadership strengths. She boasts, "On the hardwoods, Nate has a high basketball IQ in a young player combined with an equal passion for both defense and getting to the hoop. At 6'4" he's got the speed and vision to go both inside and out so playing at the next level will be a natural progression for Nate."

Along with playing basketball, Ens comes to Providence to study in the science department. Ens commented on his commitment to the Pilots by saying, "I am extremely excited to start attending Providence. Playing basketball at a higher level has been a goal of mine for many years. I love to compete and I’m looking forward to training with Coach Pierre. I feel like he wants me to be a better person as well as a basketball player which appeals to me as integrity, vision, and drive were all big components of my club experience that Mayhem coach Alex Barra instilled in me. Providence will be a great fit for me as the school is community-oriented and God-focused."